This interim financial report does not include all the notes of the type normally included in an annual financial report. Accordingly, this report should be read in conjunction with the annual report for the year ended 31 March 2021 and any public announcements made by Wizz Air Holdings Plc during the interim reporting period.

“Wizz Air continued its recovery during the third quarter of F22 and well exceeded 2019 passenger and capacity levels in the peak holiday traveling period, despite the emergence of the Omicron variant. In total, we carried 7.8 million passengers with a load factor of 77.1%. During peak weeks our capacity reached 110% of 2019 ASKs.

Our operating loss was €213.6 million as travel restrictions continued to affect demand as we continued to ramp up our workforce, fleet, bases and routes to support our path to full utilisation and pre-Covid 19 cost structure by late Spring 2022. Our liquidity remained strong and closed at €1.4 billion at the end of December 2021.”

“We have reached major milestones in the course of the fiscal third quarter. In November, we placed an order for up to 196 new Airbus neo Family Aircraft that comprise of A321neo and A321XLR aircraft, with the bulk of deliveries from 2025 onwards. This order will be a cornerstone for our ambition to reach 500 aircraft by the end of the decade. The new aircraft were ordered on highly competitive terms and represent the best technology available in the market today.  They will be instrumental in Wizz Air continuing to deliver against the lowest unit cost in the industry with the lowest environmental footprint.

In December we acquired an important portfolio of slots at London Gatwick airport that will enable us to grow to a base of five aircraft and will increase access to customers in the crucial London and South of England market. As of Spring, this will enable us to offer customers competitive ticket prices to a host of well-known and emerging destinations on our new A321neo fleet.

We have also announced our four-year 2026 1.00% EUR bond offering, at pricing even more attractive compared to our debut offering last year. The proceeds will further support Wizz Air’s ambitions as it scales-up to become an even stronger low-cost player in the coming years.”

On current trading and the outlook for the full year, Mr Váradi added:

“We continued our investment in recruitment and training, bringing in more than 1,500 talented people since the start of last summer. In January 2022 we counted already 5,550 employees, surpassing our pre-pandemic number of colleagues, in support of our growth ambitions. Our fleet also continued to grow and we ended the quarter with 150 aircraft, having taken delivery of eight new A321neo and returning two A320ceo aircraft’.

Throughout the third quarter we continued to stimulate demand with pricing, whilst staying agile in adjusting capacity that is not cash-contribution positive. The emergence of the Omicron variant and renewed travel restrictions impacted our trading performance late in the quarter and we expect demand in January, February and part of March to be impacted by ongoing travel uncertainty. As such, Wizz Air anticipates the operating loss for Q4 F22 to be slightly higher than the operating loss of €213.6 million for Q3 F22.

Despite the short-term headwinds, we are cautiously optimistic for a continued recovery into Spring and near-full utilisation from Summer onwards. We continue to back our strategic choices to invest in our fleet, grow our bases and routes, and lower our unit cost in order to take advantage of the market created in the wake of COVID-19.  We are on track to have 170 aircraft fully utilised this Summer, in a more connected and diversified network and with 6,700 people engaged in what they do best, which is to provide superb service at unbeatable prices aboard the youngest and most sustainable and efficient fleet of narrow-body aircraft operated in Europe today.”

·         FX losses for Q3 amounted to €31.1 million as the USD strengthened significantly during the quarter versus the EUR, which drove a material (unrealized) FX loss given our long positionon USD liabilities on the balance sheet

NETWORK ADDITIONS AND FLEET AND OTHER DEVELOPMENTS

‒      Tirana, Albania: one additional aircraft, taking the base to six aircraft

‒      Sarajevo, Bosnia and Herzegovina: one additional aircraft, taking the base to two aircraft

‒      Vilnius, Lithuania: one additional aircraft, taking the base to three aircraft

‒      Skopje, North Macedonia: one additional aircraft, taking the base to five aircraft

‒      London Gatwick, UK: four additional aircraft, taking the base to five aircraft, after having acquired a slot portfolio from Norwegian Air

·         In the three months ended 31 December 2021 Wizz Air has taken delivery of eight new A321neo aircraft, while returning two A320ceo aircraft, ending the second quarter with a total fleet of 150 aircraft: 60x A320ceo, 41x A321ceo, 6x A320neo, 43x A321neo. All new neo aircraft are powered by Pratt & Whitney GTF engines and feature the widest single-aisle cabin with 239 seats in a single class configuration. The combination of these technologies reduces fuel burn by 16 per cent, nitrogen oxide emissions by 50 per cent and delivers close to a 50 per cent reduction in noise footprint compared to previous generation aircraft.

·         Fleet average age stands at 5.0 years, one of the youngest fleets of any European airline, while the average number of seats per aircraft has climbed to 211 at December 2021.

·         Wizz Air signed an agreement with Airbus for the purchase of a further 102 Airbus A321 aircraft, comprising 75x A321neo and 27x Airbus A321XLR aircraft. Under certain circumstances, Wizz Air may acquire a further 15x A321neo aircraft. Airbus has also granted Wizz Air 75x A321neo purchase rights for deliveries in 2028-29, which have to be converted into a firm order by the end of 2022. Completion of the order remains subject to approval by Wizz Air shareholders.  With the new order, Wizz Air’s delivery backlog comprises of a firm order for 34x A320neo, 248x A321neo and 47x A321XLR aircraft, plus the additional order for 15x A321neo and purchase rights for 75x A321neo, a total of 419 aircraft.

The table below shows the fleet plan including the firm order linked to the new Airbus order.

·         An extraordinary general meeting (“EGM”) of shareholders is scheduled for 22 February, 2022 which will seek the approval of the new aircraft order as described above.  The shareholder circular will be mailed out by 31 January 2022.

·         Effective from 1 April 2022, George Michalopoulos, Wizz Air Chief Commercial Officer, will be stepping down from his position to pursue other interests outside of the company.

·         Anna Gatti has joined the Board of the Company as independent non-executive director with effect from 4 November 2021. Anna is a global technology and business leader with robust corporate governance experience built over years of board membership in international public and private companies.

·         Simon Duffy, senior independent director, has informed the Board that, due to other commitments, he has elected not to put himself forward for re-appointment as a non-executive Director when his current term expires on 28 January 2022.

·         With Simon’s retirement from the Board, Barry Eccleston will succeed as Wizz Air’s senior independent director.

·         Wizz Air also announces a number of additional changes to its board committees, details of which are outlined in the RNS from 20 December, 2021: https://ir.q4europe.com/Solutions/WizzAir/2372/newsArticle.aspx?storyid=15283745.

The latest Airbus aircraft order with the most efficient and sustainable aircraft technology available in the narrow-body market today, is a further testament to Wizz Air’s leadership in sustainable business practices. Our focus continues to be on delivering value for all stakeholders and to further our environmental, social and governance agenda. The most material sustainability developments during last four months were:

Wizz Air, the fastest growing European low-cost airline, operates a fleet of 149 Airbus A320 and A321 aircraft. A team of dedicated aviation professionals delivers superior service and very low fares, making Wizz Air the preferred choice of 10.2 million passengers in the financial year F21 ending 31 March 2021. Wizz Air is listed on the London Stock Exchange under the ticker WIZZ. The company was recently named one of the world’s top ten safest airlines by airlineratings.com, the world’s only safety and product rating agency, and 2020 Airline of the Year by ATW, the most coveted honour an airline or individual can receive, recognizing individuals and organizations that have distinguished themselves through outstanding performance, innovation, and superior service.

WIZZ AIR POTENTIAL EXPANSION IN THE KINGDOM OF SAUDI ARABIA

Be the first to comment on "WIZZ AIR HOLDINGS PLC – RESULTS" 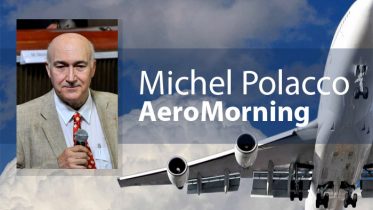 A wave of panic in the households in February of this sad year: the word nuclear is added to the words that accompany the debates on the war in Ukraine. A madness! 30 years after the end of the Cold War, 30 years after the “peace dividend” was paid to appeased nations. Nuclear: this brings us back to the origins, even before the notion of “Deterrence” existed, when the Second World War was still going on, against Japan, despite gigantic bombings such as those of 9 and 10 March 1945 on Tokyo, which saw the dropping of several tens of thousands of tons of bombs, and caused more than 100,000 deaths, and several million displaced persons, without making Hiro Hito’s Empire bend!