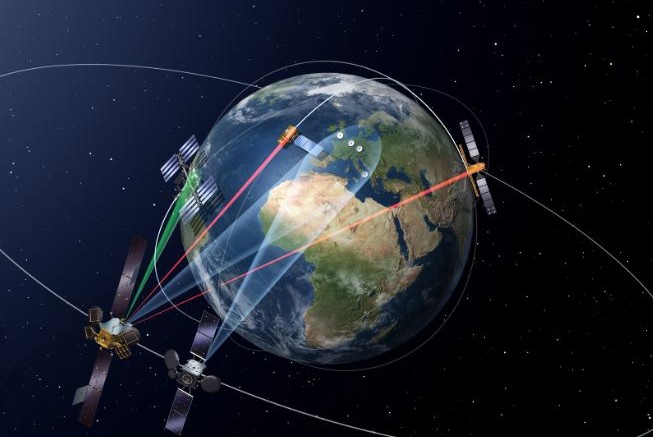 With the EDRS-SpaceDataHighway, Airbus Defence and Space and ESA are launching the equivalent of optical fibre in Space
EDRS-A, the first relay satellite of the SpaceDataHighway, was successfully launched into geostationary orbit on 30 January 2016. After a test period, it will become operational for its first end-user customer by mid-2016. The SpaceDataHighway system will provide high-speed laser communication in space at up to 1.8 gigabits per second. This major programme, which cost nearly €500 m to develop, is the result of a public-private partnership (PPP) between the European Space Agency (ESA) and Airbus Defence and Space.
Using communication relay satellites such as EDRS-A, the SpaceDataHighway will be able to transfer high-volume information from Earth observation satellites, UAVs and surveillance aircraft, or even from a space station such as the ISS. Thanks to the very high communication rates possible with lasers of up to 1.8 Gbit/s and the geostationary orbit positioning of the relay satellites, up to 50 terabytes per day can be transmitted securely in near-real-time to Earth, as opposed to the delay of several hours currently experienced.
“SpaceDataHighway is no longer science fiction. It will revolutionise satellite and drone communications, and help to keep the European space industry at the forefront of technology and innovative services,” said Evert Dudok, Head of the Communications, Intelligence & Security (CIS) business line at Airbus Defence and Space.
The laser technology developed by Tesat Spacecom, a subsidiary of Airbus Defence and Space, offers a highly precise pointing capability that enables two laser terminals located 75,000 km apart to be connected. In parallel, Airbus Defence and Space will validate the broadband (1.8 Gbps) laser link concept between EDRS-A and an Airbus A310 MRTT mid-2016. Airbus Defence and Space is also solidly committed to partner General Atomics for the airborne laser terminal product development efforts that should become available for communication with EDRS-A.
As lead contractor of the EDRS-SpaceDataHighway PPP, Airbus Defence and Space not only co-finances, owns, manufactures and operates the system but as well commercialises it. The German Aerospace Center (DLR) is also significantly participating in financing the system and also in the development and operation of the ground segment. Overall, eleven European countries are involved in the consortium.

The first communication node of the SpaceDataHighway system, EDRS-A, is a hosted payload carried on Eutelsat 9B, a Eurostar E3000-type satellite built by Airbus Defence and Space and to be operated by Eutelsat. EDRS-A will be positioned at 9° East and will be able to establish laser links with orbiting observation satellites and UAVs positioned over Europe, Africa, Latin America, the Middle East and the eastern coast of North America. A second satellite will be launched in 2017, which will extend the coverage, capacity and redundancy of the system. Airbus Defence and Space and ESA are looking for partnerships to further expand the SpaceDataHighway by 2020, with a third node to be positioned over the Asia-Pacific region. The Pacific Rim region, for instance, has witnessed its communication needs for airborne missions rise dramatically.
As part of the Copernicus initiative, the European Commission is the anchor customer for the SpaceDataHighway. Its use will allow the Sentinel-1 and Sentinel-2 satellites, all equipped with laser communication terminals, to significantly accelerate the delivery of time-critical and large volumes of data to Earth monitoring centres. In case of crisis or natural disaster management, up-to-date, near real time information is crucial for the authorities to prepare the most appropriate emergency response.
Video animation and footages can be downloaded here:
https://bit.ly/1SR8pSi https://bit.ly/1P08jpW https://bit.ly/1QizGwu https://bit.ly/2034sw7
also displayed on Youtube
https://www.youtube.com/user/airbusds
Airbus Defence and Space
Airbus Defence and Space is a division of Airbus Group formed by combining the business activities of Cassidian, Astrium and Airbus Military. The new division is Europe’s number one defence and space enterprise, the second largest space business worldwide and among the top ten global defence enterprises. It employs more than 38,000 employees generating revenues of approximately €13 billion per year.