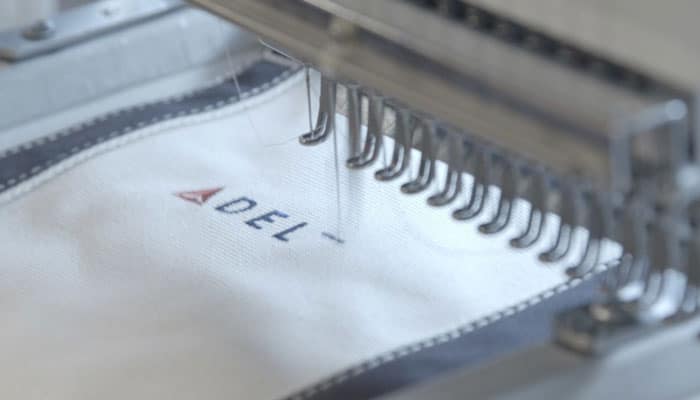 Delta Air Lines is putting the legendary service, style and quality of Lands’ End into its new employee uniforms. The airline has partnered with the global lifestyle brand to provide uniforms for approximately 60,000 employees worldwide, including the Lands’ End unconditional Guaranteed.Period.® promise. “The new uniform collection will be a strong brand statement and builds on our team members’ sense of pride as they serve our customers around the world,” said Gil West, Delta’s Senior Executive Vice President and Chief Operating Officer. “Fit, form, function and style are all integral to the uniforms for Delta people, and Lands’ End is the right partner to deliver on these things.”

“This exciting project has leveraged the strengths of the Lands’ End team with the thoughtful and meticulous attention to detail they have put into the fit, function and design of the below-wing apparel collection to support the uniform needs of Delta,” said Joe Ferreri, Senior Vice President of Lands’ End Outfitters. “We are honored to collaborate with Delta Air Lines and be the supplier of their below-wing and above-wing uniforms.”

Almost two years ago, the company established a Cross-Divisional Uniform Committee (CDUC) to represent the voices of employees in concept, design and supplier reviews and provide feedback to the design team and suppliers.

“The employee uniform committee has been involved every step of the way,” said Chad Holmes, Delta ramp agent and CDUC member. “Lands’ End brought us innovative designs and fabrics, and their team was truly passionate about creating the most functional, high-quality uniform pieces. Throughout the design process, they listened to our needs through job shadows and focus groups. Beyond the wealth of knowledge that Lands’ End brings, they have an amazing corporate culture that mirrors Delta’s of caring both for the customer and the employee.”

Following the uniform reveal next week, Lands’ End will begin crafting final uniform prototypes for Delta’s 1,000 wear testers, who will be sporting the uniforms on the job in December through March 2017. Wear testers will identify any changes needed to improve fit, form or function before the final garments are produced. The new uniform collection is slated for rollout in early 2018 to all above-wing and below-wing employees.

About DeltaDelta Air Lines serves nearly 180 million customers each year. In 2016, Delta was named to Fortune’s top 50 Most Admired Companies in addition to being named the most admired airline for the fifth time in six years. Additionally, Delta has ranked No.1 in the Business Travel News Annual Airline survey for an unprecedented five consecutive years. With an industry-leading global network, Delta and the Delta Connection carriers offer service to 321 destinations in 56 countries on six continents. Headquartered in Atlanta, Delta employs more than 80,000 employees worldwide and operates a mainline fleet of more than 800 aircraft. The airline is a founding member of the SkyTeam global alliance and participates in the industry’s leading transatlantic joint venture with Air France-KLM and Alitalia as well as a joint venture with Virgin Atlantic. Including its worldwide alliance partners, Delta offers customers more than 15,000 daily flights, with key hubs and markets including Amsterdam, Atlanta, Boston, Detroit, Los Angeles, Minneapolis-St. Paul, New York-JFK and LaGuardia, London-Heathrow, Paris-Charles de Gaulle, Salt Lake City, Seattle and Tokyo-Narita. Delta has invested billions of dollars in airport facilities, global products and services, and technology to enhance the customer experience in the air and on the ground. Additional information is available on Delta News Hub, as well as delta.com, Twitter @DeltaNewsHub, Google.com/+Delta, and Facebook.com/delta.

Lands’ End, Inc. (NASDAQ: LE) is a leading multi-channel retailer of clothing, accessories, footwear and home products. We offer products through catalogs, online at www.landsend.com, www.business.landsend.com and affiliated specialty and international websites, and through retail locations, primarily at Lands’ End Shops at Sears® and standalone Lands’ End Inlet® Stores. We are a trusted American lifestyle brand with a passion for quality, legendary service and real value, and seek to deliver timeless style for men, women, kids and the home.