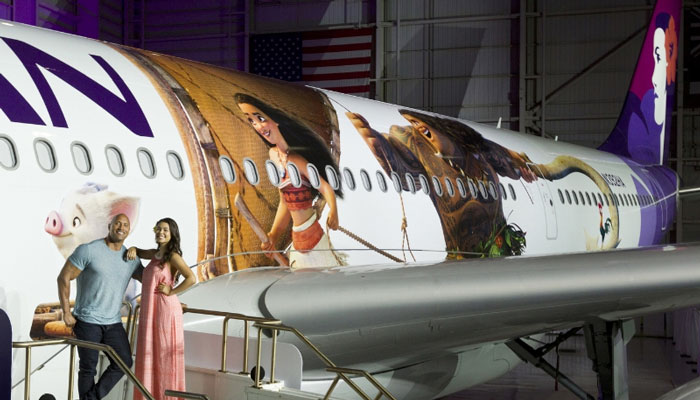 Hawaiian Airlines, in collaboration with The Walt Disney Studios, today unveiled the first of three custom Airbus A330 aircraft being adorned with imagery from the highly anticipated, CG-animated comedy adventure “Moana.” The inaugural decal design features four characters from the movie on Hawaiian’s fuselage as they take off on a wayfinding journey, including the demigod Maui, the adventurous teenager Moana, and her two friends: Heihei the rooster and Pua the pig.

“At Hawaiian Airlines, we are modern navigators, carrying guests across vast oceans to experience the unparalleled beauty of our home and richness of our culture,” said Peter Ingram, chief commercial officer for Hawaiian Airlines. “In important ways, Moana’s voyage of discovery parallels that of our guests’ own travel adventures, and we’re pleased to work with Disney to take this wonderful story to the skies.”

Dwayne Johnson, the voice of demigod Maui, and Auli’i Cravalho, the Hawai?i-born actress who is the voice of Moana, were among the first to see the inspiring design when the plane was revealed earlier today in a hangar at the airline’s home base at Honolulu International Airport (HNL). The surprise reveal was hosted by Hawaiian Airlines CEO Mark Dunkerley at a special event attended by several hundred members of the airline’s Team K?kua program — employees and their families who have volunteered their time and service to give back to the local community.

Next month, Hawaiian will reveal two additional livery designs featuring custom-made decals that show the characters interacting with the planes in dynamic and engaging ways. The unique artwork, created by Walt Disney Animation Studios in collaboration with Hawaiian’s team, reimagines each aircraft as a modern-day voyaging canoe, flying Moana, Maui, and their friends to new and exciting destinations. A time-lapse video of the first decal application and images of the first new livery can be found here.

The overhead luggage bins on all three “Moana”-themed Airbus A330s are also being decorated with characters and artwork from the film. The planes will fly on Hawaiian’s regularly scheduled U.S. domestic routes as well as to international destinations including Brisbane and Sydney, Australia; Osaka and Tokyo, Japan; and Auckland, New Zealand through March of 2017. Fans can track the course of each “Moana”-themed plane in real time at HawaiianAirlines.com/Moana.

Guests traveling to any of Hawaiian’s domestic or international destinations will enjoy special inflight entertainment to include an exclusive welcome video inspired by the film, the “Moana” movie trailer, and Cravalho’s casting video. The airline will also offer co-branded, limited-edition products such as blankets, towels and children’s and adult apparel. These items and more will be available for purchase inflight on select Hawaiian routes or online at Shop.HawaiianAirlines.com.

Hawaiian also announced the Hawaiian Airlines Wayfinder Caption Contest which begins today and runs through Oct. 23 for fans in the United States, Australia and New Zealand. To enter, contestants will be asked to select one of three “Moana” illustrations and, in 150 words or less, capture the spirit of voyaging and wayfinding. Based on the quality and creativity of the caption, the winning entry will receive a Grand Prize trip for two to attend the Los Angeles premiere of “Moana” on Nov. 14. One runner-up will receive a First Place prize of 80,000 HawaiianMiles and a Second Place winner will receive a Hawaiian Airlines and Disney Moana co-branded gift pack. For more information and to enter, follow #SoaringWithDisneyMoana and visit HawaiianAirlines.com/Moana.

According to “Moana” producer Osnat Shurer, the story of Moana, Maui and their heroic journey sprang from the imagination of the filmmakers, who were deeply inspired by the glorious people of Oceania.

“We were inspired by the history of the great Polynesian voyagers,” said Shurer.

“They were the greatest navigators in the world, voyaging across the vast Pacific without the use of modern instruments. They would do all of this using their knowledge of nature – the stars, the waves, and the currents. We’re very excited to work with the modern-day voyagers of Hawaiian Airlines to help bring this story to the world.”

Though it operates with today’s state-of-the-art technology, Hawaiian honors the courage and ingenuity of skilled Polynesian navigators, who were guided by the waves, wind, stars, moon and sun, by naming each of its A330 aircraft after celestial objects. Today’s branded aircraft is N392HA, christened as Hikianalia, the sister star to H?k?le’a. Both are part of the constellation Iwikuamo?o, and rise together above the Hawaiian Islands to help guide travelers back to their island home.

Hawaiian invites its guests and Moana fans interested in learning more about today’s celestial navigation to explore the M?lama Honua Worldwide Voyage sponsored by Hawaiian Airlines. M?lama Honua, to care for our Island Earth, is a four-year journey by the Polynesian voyaging canoe H?k?le’a and the research canoe Hikianalia across the Earth’s oceans. Powered by the wind, guided by the stars, and steered by the knowledge of ancient Polynesian navigators, the voyage will cover a total of 47,000 nautical miles and visit 85 ports in 26 countries.

A full list of Hawaiian’s aircraft names can be found here. Stay tuned to find out the names of the two other aircraft that will be outfitted with the special #SoaringWithDisneyMoana design.

For centuries, the greatest sailors in the world masterfully navigated the vast Pacific, discovering the many islands of Oceania. But then, 3,000 years ago, their voyages stopped for a millennium ? and no one knows exactly why. From Walt Disney Animation Studios comes “Moana,” a sweeping, CG-animated feature film about an adventurous teenager who is inspired to leave the safety and security of her island on a daring journey to save her people. Inexplicably drawn to the ocean, Moana (voice of Auli?i Cravalho) convinces the mighty demigod Maui (voice of Dwayne Johnson) to join her mission, and he reluctantly helps her become a wayfinder like her ancestors who sailed before her. Together, they voyage across the open ocean on an action-packed adventure, encountering enormous monsters and impossible odds, and along the way, Moana fulfills her quest and discovers the one thing she’s always sought: her own identity. Directed by the renowned filmmaking team of Ron Clements and John Musker (“The Little Mermaid,” “Aladdin,” “The Princess & the Frog”), produced by Osnat Shurer (“Lifted,” “One Man Band“), and featuring music by Lin-Manuel Miranda, Mark Mancina and Opetaia Foa’i, “Moana” sails into U.S. theaters on Nov. 23, 2016. For more information, visit https://disney.com/moana, like us on Facebook, https://www.facebook.com/disneymoana; follow us on Twitter, https://www.twitter.com/DisneyAnimation; follow us on Instagram, https://instagram.com/DisneyAnimation. Hawaiian® has led all U.S. carriers in on-time performance for each of the past 12 years (2004-2015) as reported by the U.S. Department of Transportation. Consumer surveys by Condé Nast Traveler, Travel + Leisure and Zagat have all ranked Hawaiian the highest of all domestic airlines serving Hawai’i.

Now in its 87th year of continuous service, Hawaiian is Hawai’i’s biggest and longest-serving airline, as well as the largest provider of passenger air service from its primary visitor markets on the U.S. Mainland. Hawaiian offers non-stop service to Hawai’i from more U.S. gateway cities (11) than any other airline, along with service from Japan, South Korea, China, Australia, New Zealand, American Samoa and Tahiti. Hawaiian also provides approximately 160 jet flights daily between the Hawaiian Islands, with a total of more than 200 daily flights system-wide.

Hawaiian Airlines, Inc. is a subsidiary of Hawaiian Holdings, Inc. (NASDAQ: HA). Additional information is available at HawaiianAirlines.com. Follow updates on Twitter about Hawaiian (@HawaiianAir) and its special fare offers (@HawaiianFares), and become a fan on its Facebook page (Hawaiian Airlines).