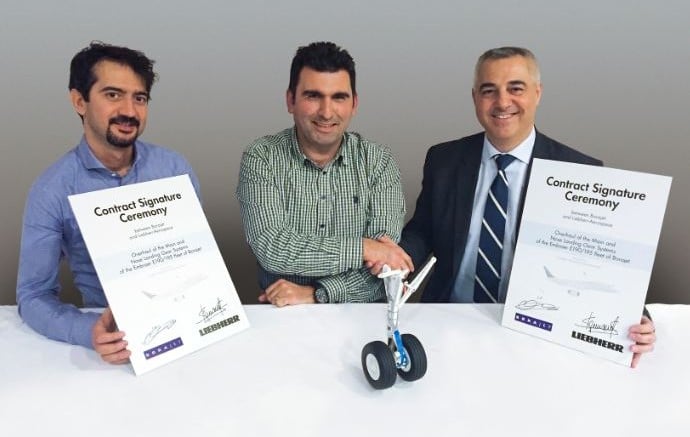 April 2016 – Liebherr-Aerospace Lindenberg GmbH and Borajet Airlines entered recently into an agreement covering the overhaul of the landing gear systems on board the airlines’ Embraer E190/195 aircraft.

Turkish carrier Borajet Airlines, which is based in Istanbul, currently operates thirteen Embraer 190/195 aircraft, each of which must be overhauled every 20,000 flight cycles or 10 years, according to the requirements defined by the Maintenance Review Board.

Liebherr-Aerospace will carry out all overhaul activities of the nose and main landing gear systems at its facility in Lindenberg (Germany). Jan Uhlig, Director Customer Support Liebherr-Aerospace Lindenberg GmbH said: “We can fully leverage our comprehensive know-how as a system developer and MRO Excellence Center, to meet the exact requirements for carrying out the service work defined in this order.”

“We feel comfortable to work with OEM Liebherr for our dense landing gear overhaul program. Liebherr has a high level of flexibility and understands what we expect as an operator”, commented Olcay Özbay, Technical Director at Borajet Airlines.