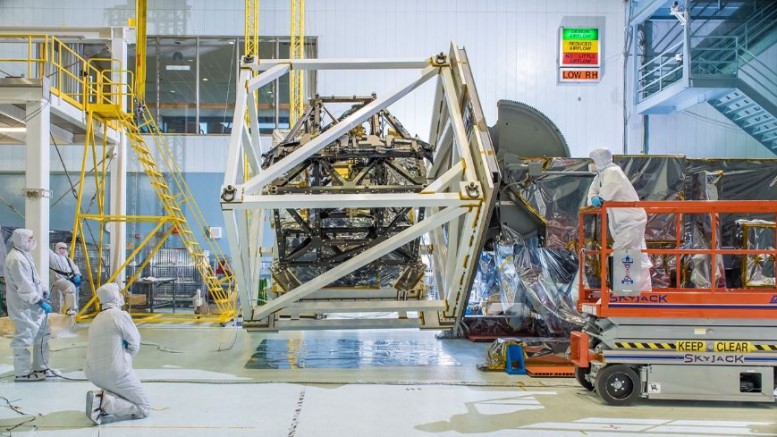 ADS instruments for the James Webb Space Telescope get thumbs-up

 The Near Infrared Spectrograph (NIRSpec) and Mid-Infrared
Instrument (MIRI) will equip the James Webb Space Telescope
(JWST) mission set for launch in 2018
 On-board the James Webb Space Telescope they will study
astronomical objects from distant galaxies to exoplanets
Near Infrared Spectrograph NIRSpec and Mid-Infrared Instrument MIRI are installed with two other instruments in JWST’s payload module called the Integrated Science Instrument Module (ISIM). Together, they have just passed with flying colors an extensive series of tests in preparation for their integration on the telescope itself and the launch of JWST in 2018.
Airbus Defence and Space supported this test campaign, like the previous ones.
NIRSpec is developed and built by industrial consortia led by Airbus Defence and Space for the European Space Agency (ESA) and MIRI is developed and build by a consortium of nationally funded European institutes (the MIRI European Consortium), for which Airbus Defence and Space provided system engineering and management support. These instruments will give us a greater understanding of objects that populate our Universe, from distant primordial galaxies to exoplanets orbiting nearby stars.
“Our instruments represent the pinnacle of technology for modern astronomy,” said François Auque, Head of Space Systems. “JWST will be hugely important in expanding our understanding of how our universe evolved. NIRSpec and MIRI are yet further demonstrations of Airbus Defence and Space’s unrivalled expertise. We are proud to be supporting the scientific research that JWST will carry out.”
MIRI was the first of all four JWST’s instruments to be delivered and integrated into the ISIM in 2013. NIRSpec followed in 2014 for initial testing. After an upgrade to flight configuration, NIRSpec was re-integrated at the beginning of 2015. The environmental test program began with mechanical tests (vibration and acoustic testing), followed by electromagnetic compatibility (EMC) testing, and the final ISIM cryogenic vacuum test was performed from October 2015 through February 2016. The 109-day non-stop test demonstrated that the complete ISIM is ready for the next higher level integration.
This Optical Telescope Element and Integrated Science (OTIS) environmental test program will start in mid-2016. Beginning with functional testing, the mechanical test programme (vibration and acoustic testing) will take place at NASA’s Goddard Space Flight Centre (GSFC). On completion of the mechanical test programme in 2016, OTIS will be shipped to NASA’s Johnson Space Flight Centre (JSC) in Houston, where the last cryogenic vacuum test will be performed to demonstrate the optical end-to-end performance of the telescope and instruments together.
NASA, ESA, and the Canadian Space Agency (CSA) are collaborating to develop JWST, designed to be the next step after the legendary Hubble Space Telescope. After its launch in 2018 on an Ariane 5 launcher from Europe’s spaceport in Kourou, French Guiana, JWST will become the largest astronomical telescope in space. It will be able to study key phases in the evolution of the Universe in great detail – from the formation of the first stars and galaxies only a few hundred millions years after the Big Bang to the formation of planetary systems in our own Milky Way galaxy today.
NIRSpec will be capable of measuring the spectra of up to one hundred objects simultaneously. It will observe large samples of galaxies and stars at unprecedented depths across large swathes of the Universe and far back in time. MIRI, a combined camera and spectrograph for mid-infrared wavelengths, will extend JWST’s observation capabilities to longer wavelengths than those covered by its other instruments, which will be vital to study light from objects in the early universe and to peer inside dust clouds where stars and planetary systems are forming today.
Source: ADS