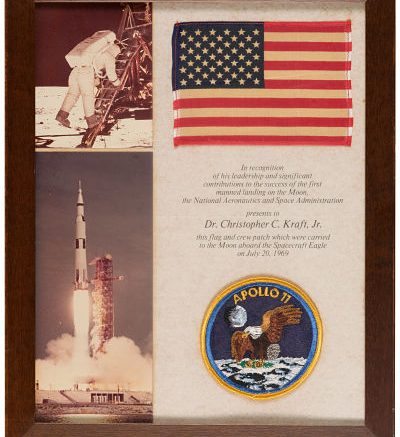 Kraft was NASA’s first Flight Director, he solely directed all of the Mercury missions, was head of missions operations for Project Gemini, was crucial in the success of Apollo and even oversaw the development of the Space Shuttle program. Kraft died in 2019.

“A valid argument can be made that Chris Kraft was as important to the growth and success of NASA as anyone in its history,” Heritage Auctions Space Exploration Consignment Director Brad Palmer said. “He was the Director of the Johnson Space Center for a decade during a crucial time in NASA’s history, and came up with the concept of NASA’s Mission Control … which now bears his name.”

Items Kraft collected throughout his legendary career will be offered to the public for the first time, when a trove of well over 100 out-of-this-world artifacts and mementos appears in Heritage Auctions’ Space Exploration Auction May 21-22.

Among the gems in the collection is an Apollo 11 Lunar Module-Flown American Flag and Embroidered (!) Mission Insignia Patch as Presented to and Directly from the Estate of NASA Legend Chris Kraft, in Framed Display, with Certificate of Authenticity (estimate: $50,000+), which in a way is much of a pioneer as was the man who held it in his personal collection. It marks the first time two separate items that were flown to the surface of the moon ever have been offered in a single display.

The lot includes a measuring 10-1/2 by 13-1/2 inches that features two color photos: one of the launch, the other of Buzz Aldrin descending the Lunar Module ladder. Also included is a U.S. flag measuring 5-3/4 by 4 inches and an embroidered mission insignia that measures 4 inches in diameter, along with text that reads:

In recognition
of his leadership and significant
contributions to the success of the first
manned landing on the Moon,
the National Aeronautics and Space Administration
presents to
Dr. Christopher C. Kraft, Jr.
this flag and crew patch which were carried
to the Moon aboard the Spacecraft Eagle
on July 20, 1969

“A lot of collectors have never seen anything like this,” Palmer said. “Unless you went to his house, you would never know it even existed.”

A group of Apollo 12-, Apollo 16- and Apollo 17-Flown Flags in Unique Wall Display Presented to and Directly from the Estate of NASA Legend Chris Kraft, with Certificate of Authenticity (estimate: $24,000+) are presented in a massive museum-quality wooden wall plaque (measuring 27 by 28-1/2 inches) with an engraved metal plate. The flags in the set include:

A Gemini 3 – Gemini 12 Presentation Set of Flown Fliteline Medals (Ten) in Lucite, One of only Twenty-four Produced, Directly from the Estate of NASA Legend Chris Kraft, with Certificate of Authenticity (estimate: $15,000+) is a beautiful presentation – one of 24 produced – of all 10 flown Fliteline medals, one from each manned flight of the Gemini program, during which Kraft was head of missions operations. Eight medals are round and 25 mm in diameter; two (Gemini 9 and Gemini 11) are oddly shaped. All are in matched silver coloring – five of them actually were minted in sterling silver and hallmarked. They all are sealed inside a block of Lucite and mounted to a wooden base, which features two engraved metal plates with the text: “THESE COMMEMORATIVE MEDALLIONS/WERE FLOWN ON EACH OF/THEIR RESPECTIVE FLIGHTS. PRESENTED TO/ CHRISTOPHER C. KRAFT/ BY THE GEMINI ASTRONAUTS.”

A Space Shuttle Columbia (STS-1)-Flown Gold Robbins Medallion, Serial Number 9F, Directly from the Estate of NASA Legend Chris Kraft, Encased in Tabletop Display, with Certificate of Authenticity (estimate: $12,000+) was one of just 24 flown aboard Columbia, the first manned, reusable spacecraft, on the first orbital test flight of the Space Shuttle, making the offered medal a real rarity from an important, high-risk “shakedown” cruise for the Shuttle program. Presented to Kraft by NASA, it has a 39mm diameter. The obverse features the mission insignia, the shuttle and its orbit around the Earth with the ship’s name “Columbia” and the surnames of the crew. The reverse includes the names of the crewmembers, John W. Young and Robert L. Crippen, and the engraved dates, “April 12, 1981” and “April 14, 1981 / RW23 Edwards AFB.”

An Apollo 17-Flown American Flag and Flown Embroidered Mission Insignia Patch in Framed Display, Directly from the Estate of NASA Legend Chris Kraft, with Certificate of Authenticity (estimate: $12,000+) includes a small flag (5-1/2 by 4-1/4 inches) flag and a 4-inch (diameter) patch mounted to a matboard measuring 13-1/2 by 10-1/2 (sight size), with three color photos from the mission. A caption framed underneath the flag and patch reads: “This Flag and Patch were carried to the Moon aboard the spaceship America Apollo XVII December 6-19, 1972.” Flown patches from this mission are exceedingly rare, and this is the first Apollo 17 flown patch and flag presentation Heritage has ever offered.

An Apollo-Soyuz Test Project Flown Silver Robbins Medallion, Serial Number 43F, Personally Presented by Deke Slayton to and Directly from the Estate of NASA Legend Chris Kraft, with Slayton’s Signed COA and Handwritten Letter of Appreciation (estimate: $6,000+) is one of only 93 flown (of 285 minted) aboard the Apollo-Soyuz Test Project, the first international manned space effort, July 17-19, 1975, with U.S. crewmembers Thomas Stafford, Vance Brand and Deke Slayton, and Soviet crewmembers Alexei Leonov and Valery Kubasov. The obverse features the mission insignia depicting the docking maneuver above the Earth and the names of the mission and crewmembers. The reverse features the title “First Joint U.S.-U.S.S.R. Space Flight” and the engraved dates. This mission effectively ended the “Space Race” between the U.S. and the U.S.S.R.  Slayton was one of the original “Mercury Seven” but was the only one who never flew into space due to being grounded in 1962 with an atrial fibrillation. Ten years later, he was cleared, with Dr. Kraft’s blessings, to fly on Apollo-Soyuz.

It is no exaggeration to call Chris Kraft’s Personal Western Electric “Bell System 52” Headset as Used on the First Manned Mercury Missions, Directly from His Estate, with Extensive Photographic Provenance and Certificate of Authenticity (estimate: $3,500+) “the headset that launched America into space.” This 1950s vintage telephone operator’s headset, fully adjustable with one earpiece (bearing Dymo label “C.C. KRAFT”) and attached microphone, was the one Kraft wore while communicating with astronauts on space missions. This headset was a souvenir he wanted to keep as a reminder of those early years creating and manning Mission Control. The lot includes 53 8-by-10-inch glossy black and white photos of Kraft wearing this headset, including on the cover of his memoir, Flight: My Life in Mission Control. The images are from Kraft’s personal archives, and most were taken at Mercury Control Center during Gus Grissom’s MR-4 flight; it is believed that very few of these have ever been seen by the public.

Other top lots in the auction include, but are not limited to:

To consign items for this auction by the March 30 deadline, contact Brad Palmer at BradP@HA.com or Michael Riley at MichaelR@HA.com. For images and information on all lots in this auction, visit HA.com/6238.

NASA Invests in Concept Development for Missions to Comet