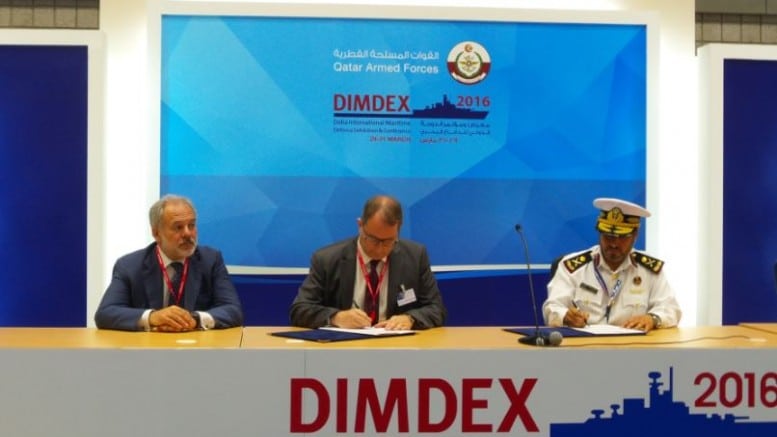 DIMDEX 2016 (Doha) – MBDA has today signed a Memorandum of Understanding for the supply of a coastal defence system for the Qatar Emiri Naval Force (QENF). This Memorandum will pave the way in the short term for a contract with the value of 2.64 billion Qatari riyals (in the region of 640 million euros).

The supply of these coastal missile systems will allow the QENF to monitor maritime coastal traffic and prevent hostile ships from reaching and threatening their territorial waters. These coastal missile systems can deploy two different munitions, Exocet MM40 Block 3 and Marte ER (the Extended Range version of the Marte missile), reflecting the maturity and excellence of these munitions. The system can work in autonomous mode with its own radar, or alternatively by data-linking to a higher level within a wider coastal surveillance network.

Antoine Bouvier, CEO of MBDA, commented: “This MoU represents the first step towards the signing of a contract for this new and innovative coastal missile system. This is a further confirmation of the trust placed by the Qatar Armed Forces in MBDA for its defence requirements.”

“With this MoU, MBDA confirms its success in proposing systems that deliver advanced operational capabilities to its customers with a high degree of affordability”, said Antonio Perfetti, Executive Group Director Sales and Business Development and Managing Director MBDA Italia. “This agreement between MBDA and the QENF also shows another important aspect: a great multinational team spirit that allows MBDA to face any challenge.”

At DIMDEX 2016, where the MoU was today signed, MBDA is displaying a full-size model of this coastal missile system.

With a significant presence in five European countries and within the USA, in 2015 MBDA achieved a turnover of 2.9 billion euros with an order book of 15.1 billion euros. With more than 90 armed forces customers in the world, MBDA is a world leader in missiles and missile systems.

MBDA is the only European group capable of designing and producing missiles and missile systems that correspond to the full range of current and future operational needs of the three armed forces (land, sea and air). In total, the group offers a range of 45 missile systems and countermeasures products already in operational service and more than 15 others currently in development.