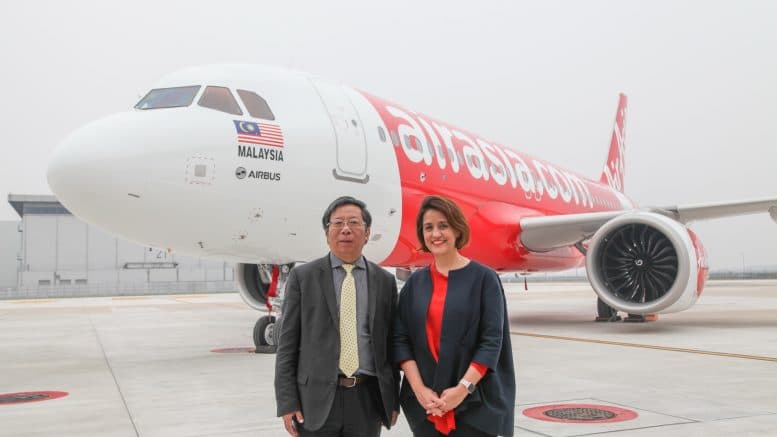 AirAsia has taken ( today in Tianjin ) delivery of the first A320neo assembled at the Airbus Final Assembly Line Asia (FALA) at a dedicated ceremony in Tianjin, China. The aircraft, powered by CFM LEAP-1A engines, seats comfortably 186 passengers and is equipped with the innovative Space-Flex cabin.

AirAsia is the largest airline customer of the A320 Family with orders for 578 aircraft. These include 404 A320neo Family aircraft.

Aireen Omar, AirAsia Berhad Chief Executive Officer said: “We are very proud to receive the first Airbus A320neo fully assembled in Tianjin, China and we would like to congratulate Airbus for achieving yet another milestone. This is also a milestone for us at AirAsia; we connect 19 cities with 59 routes into Greater China and have flown over 40 million passengers in and out of China since April 2005, making us China’s largest foreign airline by capacity. We are certainly proud to have this historic aircraft as part of our fleet. “

“We received our first A320neo last year and this is our thirteenth Airbus A320neo that we are receiving for the group, which is also the 184th aircraft delivered to AirAsia by Airbus. As we expand our network and grow our fleet, it is important for us to stay at the forefront of our business. AirAsia operates one of the world’s youngest and most modern fleets with the Airbus A320 family. We are very pleased with the A320neo, which provides up to 15 percent fuel savings and an additional range of 500 nautical miles, which translates to a lower fares for our guests.” she added.

“I am very pleased to hand over the first A320neo to be assembled in Tianjin to AirAsia. AirAsia will continue to benefit from the unique commonality between all variants of the Airbus Family and enjoy efficiencies throughout its existing fleet.” said Eric Chen, President of Airbus Commercial Aircraft China. “The delivery of the NEO is a milestone for our Asia Final Assembly Line, which will help to meet the robust demand of our customers in China and the Asia-Pacific region.”

The FALA in Tianjin, inaugurated in 2008 became the third single-aisle aircraft final assembly line location of Airbus worldwide, following Toulouse and Hamburg. It was also the first Airbus Final Assembly Line outside Europe. Today, some 340 aircraft have been assembled and delivered from Tianjin, China.

The A320neo Family incorporates the very latest technologies including new generation engines and Sharklets, which together deliver at least 15 percent fuel savings at delivery and 20 percent by 2020. With more than 5,200 orders received from 95 customers since its launch in 2010, the A320neo Family has captured some 60 percent share of the market.

Airbus brightens up the first day of the Farnborough air show