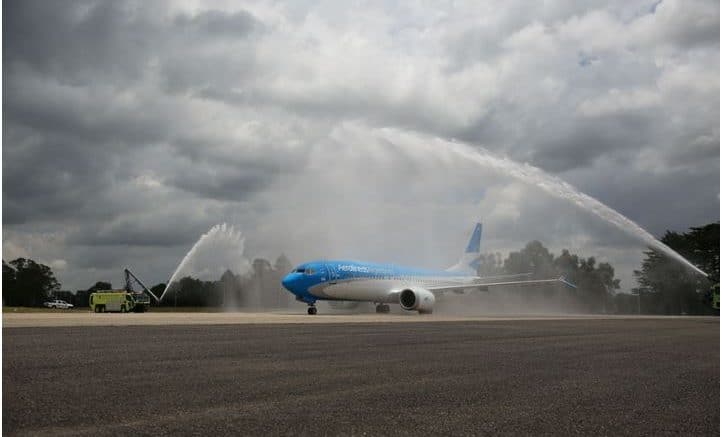 BUENOS AIRES, Argentina, Dec. 4, 2017 /PRNewswire/ — Boeing (NYSE: BA) and Aerolíneas Argentinas today celebrated the delivery and commercial debut of the first 737 MAX airplane for the airline and for Latin America.

Aerolíneas took delivery of the airplane, a MAX 8, in late November and flew the first commercial flight about a week later from Buenos Aires to Mendoza, becoming the first in the region to operate the new and improved 737 airplane.

“Adding the 737 MAX to our fleet is yet one more example of the growth we are envisioning for our company,” said Mario Dell´ Acqua, President of Aerolíneas Argentinas. “We feel both proud and responsible to continue working to deliver enhanced connectivity and an elevated experience to our passengers.”

Aerolíneas Argentinas is experiencing strong growth, with a 15 percent increase in passenger traffic in the past year, and a 22 percent increase since 2015. To support that growth, the airline plans to take delivery of 12 MAX airplanes and use them on flights regionally and, later in 2018, to the Caribbean.

“The 737 MAX 8 is a significant addition to Aerolíneas’ fleet. The MAX will enable the airline to continue to grow and win market-share in the competitive single-aisle marketplace,” said Ricardo Cavero, vice president, Latin America sales, Boeing Commercial Airplanes. “It is a tremendous honor that Aerolíneas Argentinas will be the first Latin American carrier to fly the 737 MAX, and we’re confident the airplane’s efficiency and reliability will help meet their goals.”

The 737 MAX is the fastest selling airplane in Boeing history, surpassing 4,000 total orders to date. The MAX family incorporates the latest technology CFM International LEAP-1B engines, Advanced Technology winglets and other improvements to deliver the highest efficiency, reliability and passenger comfort in the single-aisle market.

The Aerolíneas Argentinas MAX 8 is configured for 170 passengers and fly 3,515 nautical miles (6,510 kilometers).

Founded in 1950, Aerolíneas Argentinas is one of the leading companies in South America. From its bases in the Aeroparque Jorge Newbery and Ezeiza International Airport in Buenos Aires, Aerolíneas Argentinas flies to 22 international destinations in America and Europe. Along with Austral Lineas Aereas, Aerolíneas operates flights to 37 destinations in Argentina, flying to more cities in the Argentine territory than any other airline. Aerolíneas provides dynamic links between Argentina and the region through its relaunched hub in Aeroparque Jorge Newbery. The Airlines Group is carrying out an ambitious fleet renewal program, which consists of Airbus 330, Airbus 340, Boeing 737-700 / 800 and MAX and Embraer 190. Aerolíneas Argentinas is a member of the SkyTeam global alliance since September 2012.
https://www.aerolineas.com.ar/

Letter from Boeing CEO Dennis Muilenburg to Airlines, Passengers and the Aviation Community