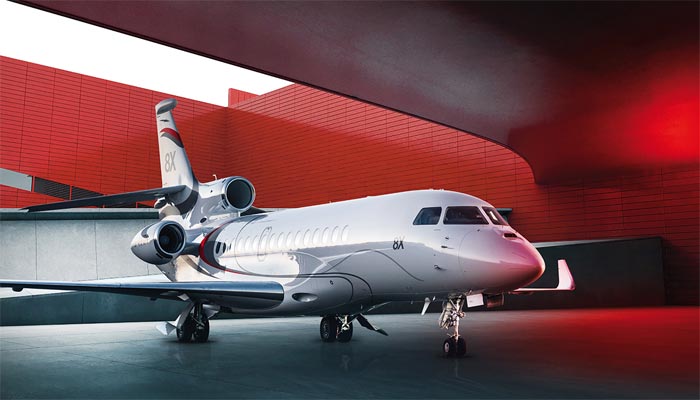 February 21, 2019 (Avalon, Australia): Dassault Aviation will be exhibiting its ultra-long range large cabin jet, the Falcon 8X, at this year’s Australian International Airshow. The 6,450 nm / 11,945 km trijet is the flagship of Dassault Aviation’s Falcon business jet line. The event, which runs from February 26 through March 3 at Avalon Airport in Geelong, will also feature the popular 4,000 nm / 7,410 km Falcon 2000LX twinjet.

“The exceptional combination of range, agility and airport performance of our wide-body trijets and twinjets allows operators to link the numerous challenging hot-and-high airports that dot the Australian continent and the surrounding region, directly to faraway business centers in Asia and other key markets in the world,” said Eric Trappier, chairman and CEO of Dassault Aviation. “And they can do this while offering lower trip costs than competing aircraft.”

These benefits have translated into strong sales in the Asia-Pacific region, particularly for the Falcon 7X on which the 8X is based. More than 40 Falcon 7X’s have been delivered in the region with a number of additional deliveries in the pipeline which include customers in Australia and New Zealand. This trend is expected to accelerate with the 8X and the arrival of the all-new ultra-wide-body Falcon 6X twinjet, which will offer the largest cabin cross section of any business jet.

The 8X is generating strong interest in Australia and elsewhere in the Asia-Pacific region because of its extended range, tremendous short takeoff and landing capability and low operating costs that the 7X is renowned for. The 8X has already registered half a dozen orders from customers in the region. Falcon twin-engine sales are expected to get a further boost in the region with the arrival of the 5,500 nm / 10,186 km Falcon 6X, which recently entered the detail design phase and is on track for a first flight in 2021 with first deliveries following in 2022.

Australia has been an important market for Dassault for half a century. The company’s first business jet, the Falcon 20, entered commercial service ‘Down Under’ in 1967, two years after its service introduction in the United States. The Falcon 20 entered the inventory of the Royal Australian Air Force the same year and served in the RAAF’s transport and utility wing for 22 years before being replaced by the Falcon 900. The force flew five Falcon 900s for 13 years. Visitors at the Australian International Airshow will be able to view 3D immersive reality demonstrations of the 6X. Dassault will be at Chalet EW11 and static space TA4/5 during the event.

To ensure optimum service levels for its rapidly modernizing fleet, Dassault has long placed a top priority on reinforcing Falcon aftermarket support in the Asia-Pacific region. Last month, the company agreed to acquire the maintenance, repair and overhaul operations of the ExecuJet Group, which offers product support at several locations in Asia-Pacific, the Middle East, Africa and Europe, including four in Australia and New Zealand.
“ExecuJet has earned a solid reputation over three decades for providing state-of-the-art maintenance services to operators throughout Australia and the broader Asia-Pacific region– services that are accessible to business jet owners of all types,” said Trappier. “By retaining the team’s separate identity and leadership, and adding invaluable synergies from the Dassault Group, we intend to make significantly enhanced service capabilities available to business jet operators here and around the world.”

The Falcon 8X can fly nonstop from Sydney to Mumbai, Perth to Johannesburg or Cairns to Anchorage. It offers the quietest and most comfortable passenger cabin in business aviation, along with a broad selection of standard cabin configurations, including a large entryway that offers a certified crew rest for very long flights and a shower option. Its industry leading digital flight control suite ensures unrivalled flying agility and stability for an ultra-smooth flight. The 8X is available with a wide range of state-of-the-art options, including:

Falcon 8X aircraft equipped with FalconEye recently gained operational credit for low visibility approaches with 100 feet minima – an enhancement that provides customers with a significant operational benefit in addition to the major improvement it brings to crew situational awareness.

The 5,950 nm/11,000 km Falcon 7X features advanced systems largely derived from Dassault’s frontline military aircraft line that have long made it one of the most popular long range jets on the market, with more than 250 units delivered to date. Its pioneering digital flight control system (DFCS) – the first in business aviation – and innovative wing design allow it to serve the most demanding destinations, from short, elevated and hot airfields such as the world’s highest commercial airport at Daocheng, China. The 7X is also famed for its ultra-quiet, roomy interior – the quietest in its category– which allows passengers to disembark fresh and relaxed after a 13-hour flight.

Falcon 6X: the New Benchmark for Cabin Size and Comfort

The Falcon 6X will comfortably link Melbourne to Shanghai, Canberra to Tokyo or Sydney to Honolulu. The 6X cabin will offer 6ft 6in (1.98 m) of headroom and a floor width of 8ft 6in (2.58 m), more than any purpose-built business jet. It will accommodate 12-16 passengers in three separate lounge areas and offer multiple layout configurations, including a large entryway, a crew rest area, and a spacious rear lounge affording greater privacy, especially on long overnight flights. The cabin will also be exceptionally bright, thanks to 30 extra-large windows and a skylight – an industry first – that provides additional natural light in the galley area.

The 6X will be equipped with an array of innovative design features, including a new ultra-efficient wing and a new generation DFCS that commands all flight control surfaces, including slats and flaps, reducing pilot workload and increasing performance and safety. The DFCS will feature a novel device called a flaperon, derived from fighter aircraft, that enhances lift and roll control, especially during approaches with a steep descent profile. It will also integrate nose-wheel steering for safer runway handling in strong cross-winds or on wet runways. The aircraft will be powered by Pratt & Whitney Canada PW812D engines, based on proven core technology already employed in 16 different Pratt & Whitney Canada PurePower engine applications. And like the Falcon 8X, this new aircraft will offer the FalconEye HUD.

Falcon 2000LXS: a Blend of Midsize Agility with Large Cabin Range and Comfort

The Falcon 2000LXS offers a short-field performance capability comparable to smaller midsize business jet models but with a range and comfort level far better than those aircraft. Equipped with a next-generation EASy II flight deck and the FalconCabin HD+ cabin management system, the aircraft offers a combination of airport performance, cabin design and efficiency unique in its class. The Falcon 2000 Series aircraft, equipped with a FalconEye HUD, have been recently certified by EASA and FAA for operational credits for low visibility approaches with 100 feet minima.