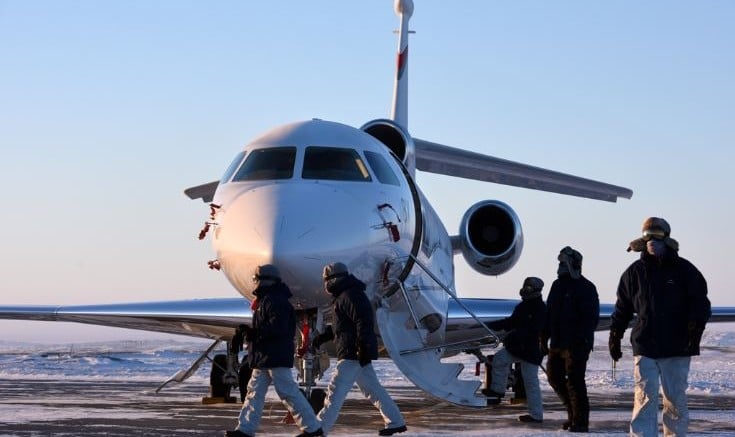 FAA and EASA certification of the 6,450 nm/11,945 km 8X is expected by midyear and entry into service by late summer.

The three aircraft in the flight test program have nearly completed all certification test requirements, and to date have accumulated over 650 flight hours in 325 flights.

After undergoing thermal, acoustic and cabin amenity testing at the Little Rock Completion Center, s/n 03, the first 8X equipped with a fully fitted interior, returned to the Istres Flight Test Center near Marseille earlier this month to prepare for cold soak trials. Intended to demonstrate aircraft system functionality under extreme weather conditions, the soak trial campaign was conducted at Ranken Inlet, Nunavut, on the northwestern shore of Canada’s Hudson Bay, from March 9-11.

All systems, including avionics, electrical, hydraulic and digital flight control systems, performed flawlessly during the tests despite temperatures that dipped as low as -27° F (-33° C). All cabin systems were successfully tested on ground after APU startup and cabin warm up. Full capability under extreme cold conditions was also demonstrated in flight at the end of the campaign.

Falcon 8X s/n 03 will now begin a global test campaign to demonstrate aircraft operational reliability and performance in different conditions of flight. The month-long campaign will take the aircraft through Europe, the Middle East, Asia and North and South America and include more than 60 missions of various lengths representing the extremes of what Falcon 8X customers might expect to face during their aircraft’s operational life. The campaign will focus particular attention on cabin equipment and functionalities and other high speed communications systems during long, intercontinental flights and flights over remote areas.

“We are delighted and thrilled with the way the Falcon 8X program is proceeding,” said Eric Trappier, Chairman/CEO of Dassault Aviation. “The flight test campaign has been flawless and the aircraft will be in initial customers’ hands this summer, just as planned when we launched development three years ago.”

Meanwhile, as the flight testing and certification campaign nears completion, series production and support activities are moving into high gear. Falcon 8X s/n 21 recently entered final assembly in Bordeaux-Merignac and six airplanes are now in completion at Little Rock. Dassault Aviation recently completed work on a new hangar in Little Rock to handle 8X completions and broke ground on a new six-bay hangar at Bordeaux-Merignac to provide additional maintenance and repair resources for the 8X and 7X models.

Derived from the popular Falcon 7X, the ultra-long range Falcon 8X was unveiled in May 2014 at the European Business Aviation Convention & Exhibition and first flew on February 6, 2015. The 8X will offer the greatest range and the longest cabin of any Falcon, allowing it to fly passengers comfortably from Beijing to New York, Hong Kong to London or Los Angeles to Moscow, nonstop. It will also share the 7X’s exceptional operating economy and short-field performance.

In addition to the quietest cabin and the most advanced digital flight control system in business aviation, the trijet will be available with Dassault’s new FalconEye Combined Vision System, the first head up display in the industry to meld synthetic and enhanced vision capabilities, as well as the largest selection of standard cabin configurations of any large business jet.