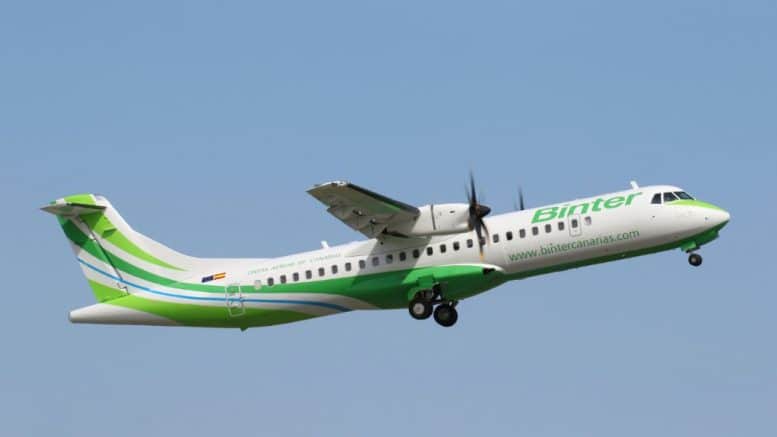 Europe’s regional fleet is poised for growth by 2035

The new aircraft will contribute to the fleet renewal process that the airline commenced two years ago with the purchase of the first six ATR 72-600s. Binter’s new order reflects the continued popularity, growing confidence and reliability of the ATR 72-600 among ATR customers.The airline has already received four ATR 72-600s, and with the replacement of their remaining 14 ATR 72-500s will bring the most modern standards of comfort to its operations across the archipelago. In addition to the introduction of the new ATRs, the airline’s subsidiary in Cape Verde, Binter CV, is starting operations this month with ATR 72-500s.

Today, ATR is the regional market leader in Europe and Binter’s latest order highlights the important role turboprops will play in supporting Europe’s future regional air connectivity over the next 20 years.

According to ATR’s market forecast 2016-2035, the average annual fleet growth within Europe is set to grow at 3.3% per annum, driving a need for 600 turboprop aircraft to address the Europe’s rising regional and domestic ai ATR-Binter-ERA-2016-EN.pdfr travel requirements. Promoting community development with links between secondary and tertiary airports as well as regional access from and to the main hubs poised Europe for new route development – up to 400 new routes are forecast by ATR across the next two decades.

Pedro Agustin del Castillo, President of Binter, stated: “The ATR 72-600, which features navigation systems as those of the most modern Airbus large aircraft, is the most versatile and fuel-efficient aircraft in its category today. It is clearly the best aircraft to continue modernising our fleet, optimising our network, and ensuring future growth opportunities. Our new order further reaffirms Binter’s commitment to the long-term development of affordable air transportation.”

“We are delighted that Binter, an often-awarded carrier has renewed its confidence in the ATR 72-600,” said Patrick de Castelbajac, ATR Chief Executive Officer. “The unbeatable operating costs and superior comfort levels offered by the aircraft make it the perfect platform for Binter’s high quality product offering. We look forward to further developing our partnership.”

Created in 1988, Binter starting operating its first ATR in 1989 on the Canarian inter-island network. The airline, originally owned by Spain’s flag carrier Iberia, was purchased in 2002 by a local group of entrepreneurs. Their 18 young and environmental-friendly ATRs represent one of the largest fleet of ATR aircraft in Europe, and have transported more than 55 million passengers, not only in inter-archipelago operations, but also with direct flights to Morocco, Portugal’s island Madeira and Cape Verde.

Founded in 1981, ATR is the world leader on the market for below-90-seat regional aircraft. Since its creation, ATR has sold over 1,500 aircraft. ATR models equip the fleets of over 200 airlines in nearly 100 countries. ATR is an equal partnership between two major European aeronautics players, Airbus Group and Leonardo-Finmeccanica. Its head office is in Toulouse. ATR is ISO 14001 certified. For additional information, log on to www.atraircraft.com. Follow ATR on its official YouTube channel: ATRbroadcast and on Twitter: @ATRaircraft.