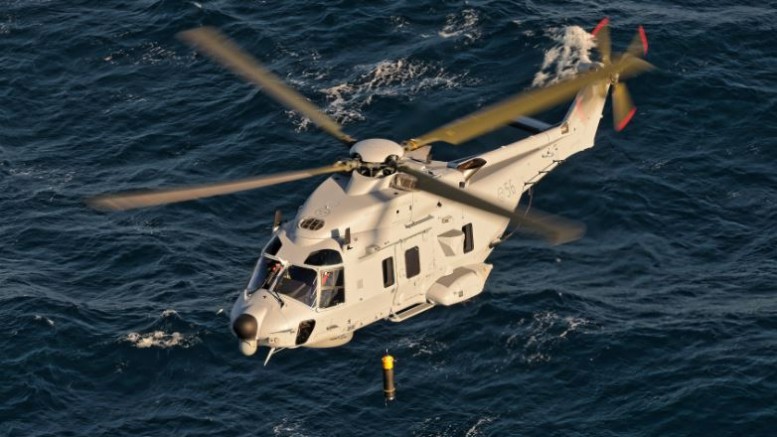 • Specialized naval helicopter with underwater sonar system, tactical radar and high cabin
• First ASW-version out of an order of 18 helicopters in total
• Four previously delivered NH90s to be modified for anti-submarine-warfare

Donauwörth, 17 December 2015 – Today, Airbus Helicopters delivered the first Swedish NH90 in full anti-submarine warfare (ASW) configuration to the Swedish Defence Materiel Administration FMV (Försvarets Materielverk). The fully-qualified rotorcraft has an entirely customized mission system including underwater sonar, tactical radar and high cabin for improved interior space.
“In terms of versatility and customisability, the Swedish NH90 ASW demonstrates the benefits of an integrated, highly powerful, fly-by-wire helicopter platform”, said Wolfgang Schoder, Head of Light and Governmental Programmes at Airbus Helicopters. “Specially tailored for its maritime missions and the operative environment in the Baltic Sea, this helicopter is best-suited for the customer’s requirements.”
In total, Sweden has ordered 18 NH90, 13 equipped for search-and-rescue missions (SAR) and five in ASW configuration. In the frame of today’s delivery, FMV and the manufacturer NHIndustries have also signed a contract to modify four already delivered NH90 from SAR to ASW configuration, bringing the total Swedish NH90 fleet to nine ASW and nine SAR aircraft.
Prior to delivery, the aircraft has been thoroughly tested by the Swedish acceptance team in Donauwörth and over water in Marignane.
Several military services around the globe are already operating the NH90 in search & rescue, tactical transport, ASW or surveillance missions over sea. “With 260 NH90s already delivered to 13 different nations and nearly 100,000 flying hours in operation, this combat-proven helicopter is now confirming its worth at the hands of the most demanding customers around the globe.” said Schoder.
Management of the NH90 program is handled by the NHIndustries consortium, which is owned by Airbus Helicopters (62.5%), AgustaWestland (32%), and Stork Fokker (5.5%).