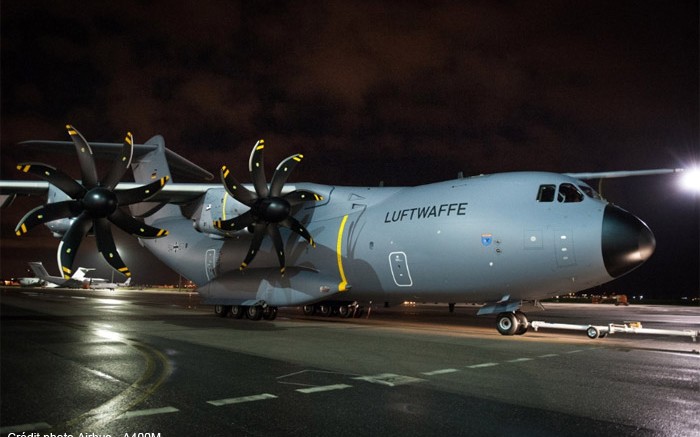 Airbus Defence and Space has signed a long-term Global Support Service contract for the A400M new generation airlifter with the UK, France and Spain.
The new agreement, effective 1 December, runs as a first step for two years and follows previously signed contracts which provided support for France and UK in their early years of operation of the A400M. It additionally forms the basis of support for Spain which accepted its first aircraft on 1 December.
This first phase of the agreement paves the way for any other OCCAR nation to join later and benefit from this package as well as additional new services currently under development.
Head of Military Aircraft Services Stephan Miegel said: “The contracts that were put in place to see the A400M into initial service have worked well, but this next stage will provide a sophisticated and highly integrated support service that will further free operators to focus on their mission, knowing that they can rely on robust support for the years ahead. We would encourage other A400M operators to take advantage of these arrangements which we are convinced have the potential to let them operate the aircraft to its maximum capability.”
Under the new arrangement, the three nations will benefit from a spares pool, technical and engineering support, maintenance and flight operations services.
Customer nations will see numerous benefits from the sharing of these resources and assets in a common central services operation including substantial cost savings, increased efficiency of service, and greater flexibility to meet their specific operational requirements.
The contract was awarded by the UK’s Defence Equipment & Support Agency (DE&S), the French Direction générale de l’armement (DGA) and Spain’s Direccion General de Armamento y Material (DGAM) through the OCCAR international programme management organization.
About Airbus Defence and Space
Airbus Defence and Space, a division of Airbus Group, is Europe’s number one defence and space enterprise and the second largest space business worldwide. Its activities include space, military aircraft and related systems and services. It employs more than 38,000 people and in 2015 generated revenues of over 13 billion Euros.