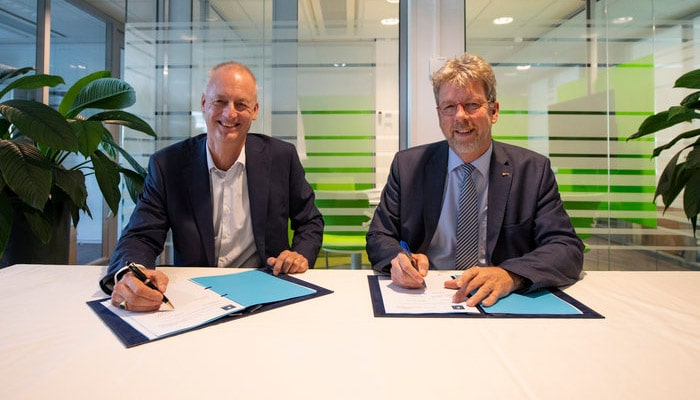 Europe’s 26 navigation satellites in orbit are providing Galileo Initial Services – available to users around the globe since 2016 – and a new ESA contract signing means these services will be delivered on a more accurate basis and more securely than ever.

ESA has awarded a new framework contract and two new work orders to Thales Alenia Space in France, to upgrade the Galileo Mission Segment – that element of the worldwide Galileo ground segment dedicated to delivering navigation services – and the Galileo Security Monitoring Centre (GSMC) near Paris, as well as to implement a second GSMC in Spain, near Madrid.

“Galileo has already proven to be the highest performing satellite navigation system in the world, even before the constellation is complete,” the ESA Director commented. “This achievement is the result of the close collaboration between the public sector – the European Commission, the European GNSS Agency and ESA – and our industrial partners throughout Europe.

“Today I am very happy to announce a continued relationship with Thales Alenia Space in one of the most complex parts of the system, namely the Ground Mission Segment, and thank them for their commitment to the programme.”

The constellation in orbit is only one element of the overall satellite navigation system – the tip of the Galileo iceberg. At the same time as the satellites were being built, tested and launched, a global ground segment was put in place.

Establishing Galileo’s ground segment was among the most complex developments ever undertaken by ESA, having to fulfil strict levels of performance, security and safety. Last year responsibility for operating the Galileo ground segment was passed to ESA’s partner organisation, the European GNSS Agency (GSA). Nevertheless, ESA continues to be in charge of the maintenance, development and evolution of the ground segment, as well as the development of the space segment.

The first work order contracts Thales Alenia Space as prime contractor to undertake all necessary activities to upgrade the Galileo Mission Segment and the GSMC as part of Galileo’s exploitation phase.

This work order also includes the construction of additional uplink stations – tasked with uplinking the latest navigation messages to the Galileo constellation – at the existing Galileo ground station sites of Papeete in French Polynesia and Svalbard in Norway. A new sensor station – providing a ground-based measurement of Galileo signal quality and precise satellite position – will also be installed at Wallis Island in the Pacific.

The work order will also augment the capabilities for implementation of the Public Regulated Service (PRS), the single most accurate and secure class of Galileo signals. Encrypted PRS signals will be made available only to authorised governmental users through approved national authorities.

Together the two GSMCs will ensure the security of the overall Galileo system and manage PRS access and operations.

The integration, qualification, deployment and migration into operational services of the various upgraded segments will be undertaken over the next three years.

ESA has issued these work orders in its role of undertaking the design and development of future upgrades and the technical development of infrastructure as well as overseeing Galileo’s deployment, on behalf of the European Union, Galileo’s owner.

Embraer and Azul Firm Up Order for Additional E195-E2 jets