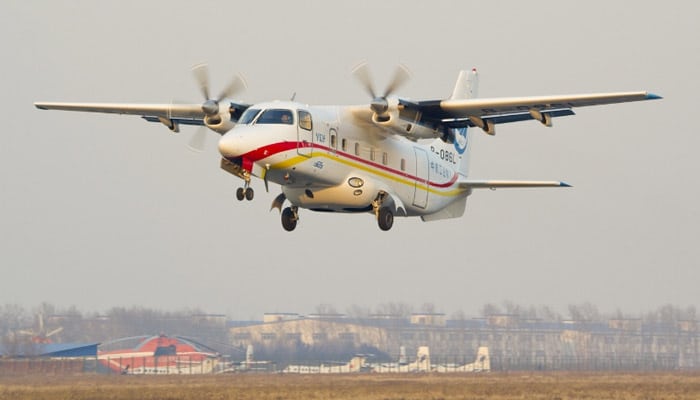 BEIJING, Feb. 26, 2016 /PRNewswire/ — On Feb. 25th, AVIC announced that they received an information sent by FAA (the Federal Airworthiness Authority of US) on Feb. 22nd (US local time), saying that the advanced turboprop new-generation general-purpose regional aircraft Y12F, independently developed by AVIC, has been granted the Type Certificate (TC) by FAA. This is the third FAA TC for the Y12 series following the former two granted to Y12IV and Y12E aircraft. Furthermore, till now Y12F is the unique FAA certified 8-ton commuter aircraft as per FAR Part 23 worldwide and has been put into market.

Y12F Low-Altitude Flight
Y12 series aircraft, developed by AVIC Harbin Aircraft Industry Group Co., Ltd. (AVIC HAIG), is the first civil aircraft series that obtained the TCs of many advanced countries like US, UK and Russia, etc. It has wide applications, such as passenger/cargo transportation, maritime surveillance, air dropping and parachute jumping, aerial photographing, geological exploration, medical care and rescue, and cloud seeding, etc. Y12F is designed with the maximum takeoff weight of 8.4 tons, a maximum payload of 3 tons, an economic cruise speed of 400 km/h, a full-tanks range of 2255 km, the maximum service ceiling of 7000 m, and with the capacity of 19 passengers or 3 LD3 containers. Compared with the competitors of the same category worldwide, it has obvious advantages in the performance and the comprehensive efficiency, mainly reflected by a bigger cabin volume, a higher payload and speed, a longer range, an excellent high altitude performance, and particularly by a bigger carrying capacity (“ton-km/hour” index) which is 1.3 to 2 times of that of the competitors.

By now, more than 200 Y12 series aircraft have been delivered and are servicing in more or less 30 countries and regions. AVIC HAIG has gained orders from many Chinese and foreign customers covering a certain amount of Y12F. Within the year 2016 to 2036, the total demands of the Chinese and foreign markets are expected to exceed hundreds of Y12F aircraft.

CAAC and FAA accepted AVIC HAIG’S TC Application for the Y12F aircraft separately in 2005 and 2007, and made certifications independently. In December of 2012, Y12F aircraft succeeded with its maiden flight. The CAAC and FAA validation for Y12F basic configuration TC covers the complete ground tests and flight test verifications lasting 5 years covering 911 hours 16 minutes/1247 landings. We accomplished the review and supplementary test flights by FAA authority in 2014 and 2015 separately, which is the final step of the certification flight tests. Subsequently, we accomplished the review to the Y12F flight manuals and continuous airworthiness documents by FAA certification department and AEG, and got approved successfully, which implies all the certification activities for FAA TC of Y12F aircraft completed.

During the process of certification, FAA raised 42 IPs and IORs in total. Along with the close of all the IPs and IORs, AVIC HAIG developed and mastered a series of advanced critical technology like damage tolerance design and fuel system negative acceleration verification flight test, etc., and linked CAAC and FAA authorities regarding the verification methods and regulations directions of Part 23-Commuter Category Airplane. It was the first time for newly-developed Chinese civil aircraft to implement CAAC and FAA airworthiness certification activities co-currently in terms of planning, verification and certification. The success of Y12F aircraft accumulates valuable experiences for the development and airworthiness certification of the Chinese general purpose aircraft and lays a foundation for future Chinese commuter airplanes to apply for FAA type certificates as per Part 23.