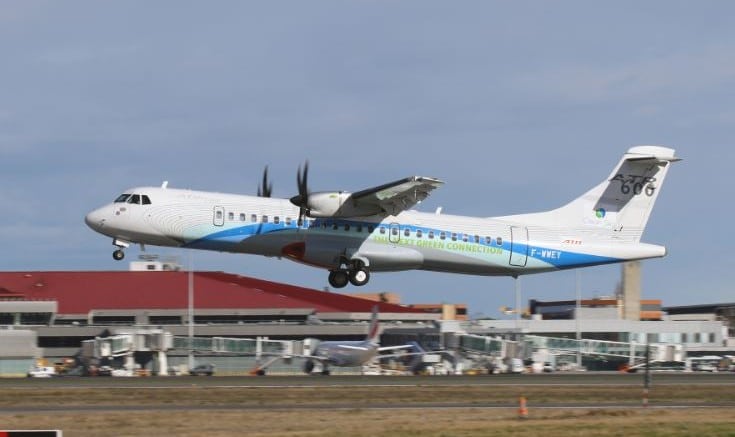 Toulouse, February 26, 2016: An ATR 72 prototype has taken to the skies to launch the second flying demonstration campaign as part of the EU’s Clean Sky Joint Undertaking (CS JU) program. The aim of this flight trial is to test an all electrical energy management system, optimizing the electrical power distribution. This second flight test campaign also performs checks on a new all electrical air conditioning system.

The current ‘All Electrical Aircraft’ (AEA) flight tests campaign comes on the heels of the first “green” flying demonstration of the Clean Sky program, succeeded on July 2015 with the same ATR 72 prototype aircraft. The aim of the first flight test campaign was to test new and more effective composite insulation materials and new vibro-acoustic sensors integrated into a large panel of the ATR aircraft fuselage. The flights also tested new generation optical fibers for improved identification of micro-cracks and easier maintenance.

The advanced technologies tested through AEA Flying Demonstrator have been jointly developed by ATR’s shareholder Finmeccanica (formerly Alenia Aermacchi), CS JU members such as Liebherr for the electrical air conditioning system and Thales for the electrical generation, and CS JU partners via calls for proposals. ATR has been part of the project since it was initiated in 2008 through its Italian shareholder Finmeccanica the Coordinator of Green Regional Aircraft Integrated Technology Demonstrator, inside the Clean Sky Joint Technology Initiative (CS JTI). Clean Sky is a measure adopted by the European Parliament to support the trend of public-private partnership initiatives in the field of research. The aim is to jointly develop a broad spectrum of technologies devoted to a clean, innovative and competitive air transport system.

Alessandro Amendola, ATR’s Senior Vice-President Engineering, underlined “the outstanding work jointly carried out by teams at Finmeccanica and ATR in order to test the new ‘all electrical systems’ and further contribute to developing a greener version of regional aviation. The ATR aircraft already have a reputation worldwide for their low fuel burn and their environmental friendliness. Contributing to developing and deploying new technologies for the greener aviation of tomorrow is a key part of ATR’s identity”.

Founded in 1981, ATR is the world leader on the market for regional aircraft with 90 seats or less. Since its creation, ATR has sold over 1,500 aircraft. With over 28 million flights, ATR models equip the fleets of over 200 airlines in nearly 100 countries. ATR is an equal partnership between two major European aeronautics players, the Airbus Group and Finmeccanica. Its head office is in Toulouse. ATR is ISO 14001 certified. For more information, please visit https://www.atr-aircraft.com