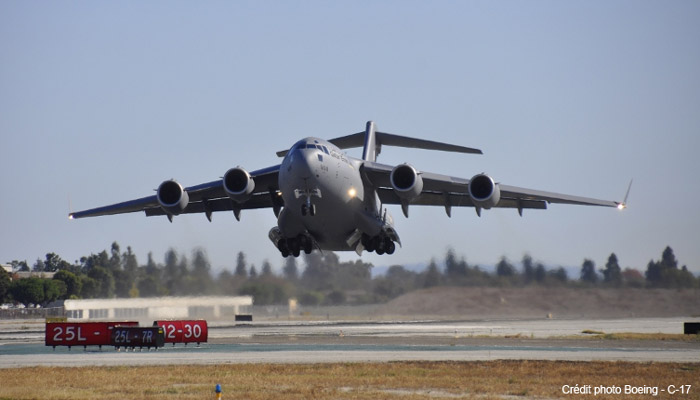 Boeing and the C17, a page is turned

It is always with a hint of nostalgia that production of an aircraft is halted, even a military plane. This was the case on November 29 at Long Beach when the final C-17 Globalmaster III, a large military transport aircraft, was rolled out.

This very last, 279th aircraft took off for the Boeing site in San Antonio (Texas) to await delivery to the Qatar Emiri Air Force in early 2016.

Not quite the end of an era, though, since the aircraft is still in service in six air forces: those of the United States, the United Kingdom, Australia, Canada, India, Qatar, the United Arab Emirates, Kuwait and NATO. There is no doubt then that this plane will continue to see plenty of action, at present in the troubled countries of the Middle East.

For 35 years, much has been said about this aircraft, designed in the early 1980s by McDonnell Douglas, which was acquired by Boeing in the summer of 1997. The programme experienced a number of glitches early on and finally made its first flight on 15 September 1991, a year behind schedule. The subsequent series of delays and spiralling costs is evocative of the misfortunes of the A400M, a European aircraft developed by Airbus, currently in service in the French air force despite persistent problems.

The successive delays and escalating costs of the two programmes might well be linked to the climate underpinning their development. The uncertainties surrounding the C-17 programme from the outset, for instance, and the need to integrate a new corporate culture after Boeing’s acquisition of McDonnell Douglas both disrupted the work of designers and preoccupied airlines, concerned for their future.

In the case of the A400M, initial problems stemmed from the engines: the TP400 turboprop developed by the European consortium Europrop International (EPI) suffered from serious programme management issues. Without going into all the various problems here, it is worth mentioning that, as was the case for the C-17, management of the A400M changed hands several times between the commercial aircraft side (Airbus) and the military aircraft branch (Airbus Defence & Space). Indeed lengthening delays had the better of the Airbus Defence CEO earlier this year.

One thing is for sure (at the risk of stating the obvious): it is clear once again that aircraft programmes, whether civilian or military, are consistently behind schedule. It has to be said that when industrialists justifiably attempt to make technological breakthroughs, their path is strewn with pitfalls, making any estimate of the time necessary for development and industrialisation very tricky.

And delays inevitably contribute to increasing costs, added to the fact that, when attempting to convince bankers (for commercial activities) or armies (for military aircraft or weapons systems), it is only human to underestimate costs in order to secure markets.

All these considerations lead me to believe that the A400M, however dark its future may seem today, should find a place in other air force fleets. Egypt could well be the first external customer of this partnership programme carried through by 7 European countries: Germany, France, Spain, Britain, Turkey, Belgium and Luxembourg, who have together ordered 170 machines, the first of which was delivered to France in April 2014.

As one programme bows out, another, with new governance, must surely be promised a bright future.