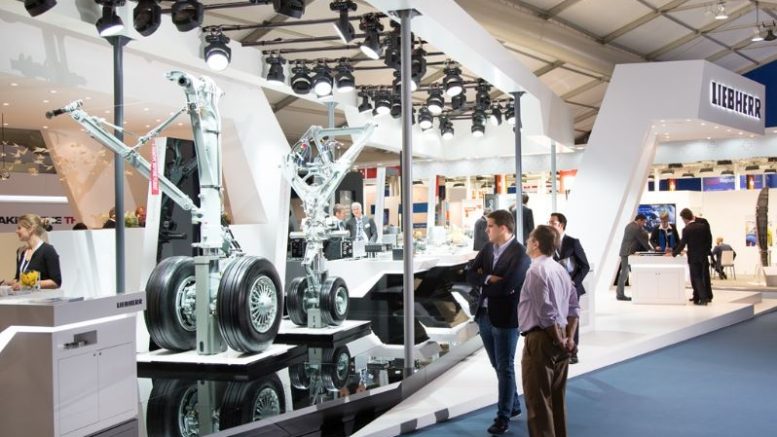 June 2016 – As one of the leading system suppliers worldwide, Liebherr-Aerospace has a long tradition of taking part in the ILA Berlin Air Show. This year, visitors to the trade show, which takes place at the Berlin ExpoCenter Airport from June 1 to 4, will be able to see the company at various locations.

At the 250 m² stand, No. 101, hall 2, Liebherr-Aerospace will be presenting a range of exciting systems and components, once again showcasing its innovative power in the product areas of flight control, air management, landing gear as well as gears and gearboxes. The highlights include a nose landing gear housing with cadmium-free,   and more environmentally-friendly corrosion protection coating as well as a weight-optimized spoiler valve block, which is manufactured by additive layer manufacturing (“3D printing”). Moreover, an animated film about Liebherr-Aerospace’s capabilities as a developer, manufacturer and integrator of aircraft systems will be providing visitors with comprehensive information on the products Liebherr-Aerospace offers and how they function on board an aircraft.

At this year’s ILA Berlin Air Show, Liebherr’s components division will, for the first time, be represented by its electronic competence center, Liebherr-Elektronik GmbH, and displaying exhibits at Liebherr-Aerospace’s stand. Its product portfolio includes control and power electronics, which are developed and manufactured at the Lindau (Germany) site. Liebherr’s electronic components have already proven their reliability in many aircraft programs. With a wide portfolio of different hardware platforms, Liebherr develops electronic equipment up to a design level assurance A (DAL A) for power electronics as well as control and monitoring electronic families. Exhibits at the ILA further include controllers for integrated air management systems; control and monitoring electronics for high-lift systems, a controller for supplemental cooling systems with power and control electronics, power electronics for an active differential gearbox as well as remote electronics.

Topics such as industry/ aerospace 4.0, digitalization/ virtual world and sustainability will be the focus of the ILA Future Lab 2016 at stand No. 303 in hall 2. Additionally showcased at this stand by the Federal Ministry for Commerce and Energy (BMWi) will be Liebherr-Aerospace’s innovative, weight-optimized equipment, which is made by additive layer manufacturing (ALM or “3D printing”). Visitors therefore will have the opportunity to take a glimpse into the company’s research and development activities.

Liebherr-Aerospace at the ILA CareerCenter and ILA CareerShop

At the ILA CareerCenter in hall 1, representatives from Liebherr-Aerospace’s Human Resources department will be welcoming visitors on June 3 and 4, 2016 at stand 103. The team will be providing information on training and career opportunities and prospects. Moreover, Liebherr-Aerospace will be presenting the professions of industrial mechanics and surface coaters at the ILA CareerShop, and inviting visitors to build small helicopter models. The CareerShop, which will be hosted by the Federal Association for the German Aerospace Industry (BDLI) at stand No. 201 in hall 1, will introduce visitors to apprenticeship and training opportunities across the entire aerospace sector.

In hall 3, the Federal Army’s Pavilion will be presenting the successful partnerships forged between the German Air Force and companies of aerospace equipment industry in Germany. Alongside other suppliers, Liebherr-Aerospace will be showing exhibits from aircraft programs such as the Tiger.

Be the first to comment on "ILA Berlin Air Show 2016: Strong Presence of Liebherr-Aerospace"