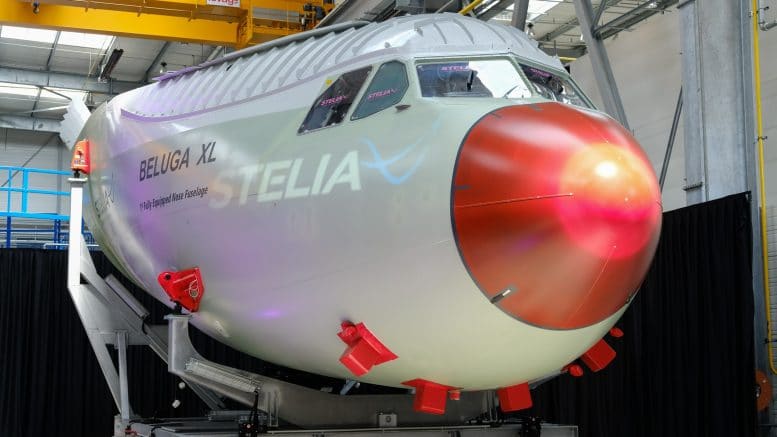 STELIA Aerospace’s plant in Méaulte, France, delivered today the fully equipped nose section of the first BelugaXL, to its customer Airbus.
Transferred from Méaulte to the Beluga Final Assembly Line in Toulouse by BelugaST, this section boasts impressive dimensions: 12m long, 6m large, 4m high and a total weight of 8.2 tonnes. The installation of the aircraft’s systems represents some 1,200 m of electric harnesses (60 km of cables) and 400 m of metallic and composite pipes.
Since January 2015, the teams of four STELIA Aerospace sites (Méaulte, Saint-Nazaire, Tunis and Toulouse) have worked closely with the Airbus teams in order to ensure the design, assembly and equipment of this emblematic section of the European aircraft manufacturer’s future super transporter.
The BelugaXL, a last generation aircraft, is the successor of the current BelugaST. The programme was launched in November 2014, to address the increasing transport needs due to the production ramp-up. In this context, Airbus has decided to increase the capacity of its existing BelugaST fleet and to develop and manufacture five new BelugaXL, derived from its polyvalent long range aircraft, the A330.
After the design by STELIA Aerospace engineers in the Toulouse design office, the Saint-Nazaire site manufactured the pipes and managed the stretching and forming of the panels, as well as the manufacturing of several complex mechanical parts, while the Tunis site produced several metallic parts, and the Méaulte site managed the assembly and equipment of the section.
This is the first time the Méaulte site delivers a fully equipped nose section, therefore demonstrating its capacity to deliver a complete « Plug-and-Fly » section.
Cédric Gautier, CEO of STELIA Aerospace, said: “We are proud of delivering, on time, the first nose section of the future BelugaXL. STELIA Aerospace teams worked hard for 30 months in order to deliver, at the exact required date, this iconic section, with oversized dimensions and a state-of-the-art design. Moreover, this delivery of a fully equipped « Plug-and-Fly » nose section is a first for our Méaulte site ».
…/…
The next step for STELIA Aerospace will be the delivery, this summer, of the upper fuselage/ cargo door sub-assembly, currently being manufactured on the Rochefort site.
With a turnover of 2,1 billion euros and 6,600 employees worldwide ( 4,500 in France, 600 in North America and 1,500 in Tunisia and Morocco), STELIA Aerospace is one of the world leaders in the field of aerostructures, pilot seats and Business class and First class passenger seats.
STELIA Aerospace designs and manufactures the front fuselage sections for the entire Airbus family, as well as fuselage sections and specific sub-assemblies for Airbus, fully equipped wings for ATR, fully equipped central fuselages for Bombardier’s Global7000, and complex metallic and composite aerostructure parts for Boeing, Bombardier, Embraer, Northrop-Grumman…