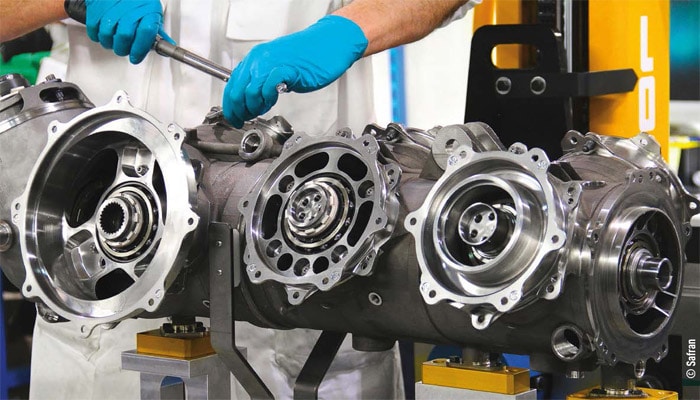 At this year’s Paris Air Show, the 52nd, Safran Transmission Systems is unveiling its new power transmission system, the AGB NG (accessory gear box – next generation), on the Safran stand (Hall 2A, No. 228-252). This new architecture is designed to meet the requirements of the next generation of aircraft engines, set to hit the market towards 2025.

The power transmission system transfers mechanical power from the jet engine to aircraft and engine equipment that are essential for operation, including the starter, electrical power generator and fuel pump. This energy is tapped from the engine, then transmitted to the accessories through a gear train.

Developed within the scope of the vast European research program Clean Sky 2, the AGB NG features an innovative architecture that facilitates its integration with the engine and nacelle.

Traditionally placed at the edge of the fan, the AGB NG is now located near the high-pressure compressor, in the core section of the engine. Changing this location helps reduce fuel consumption because it allows a smaller diameter nacelle, which in turn reduces aerodynamic drag. The new position of accessories on the AGB NG also reduces the system’s size by 30% and its weight by 20%, in relation to a conventional system. At the same time, the AGB NG simplifies access to accessories, thus facilitating maintenance operations. The AGB NG is now undergoing a technology maturation program to demonstrate its performance for the next generation of aircraft engines, expected to hit the market towards 2025.

Safran is an international high-technology group and tier-1 supplier of systems and equipment in the Aerospace and Defense markets. Operating worldwide, Safran has nearly 58,000 employees and generated sales of 15.8 billion euros in 2016. Safran is listed on the Euronext Paris stock exchange, and its share is part of the CAC 40 and Euro Stoxx 50 indices. Safran Transmission Systems is the world’s leading supplier of mechanical power transmission systems for both commercial and military aircraft. With some 35,000 delivered to date, the company holds 60% of the global market for mainline commercial jets (over 100 seats). For more information : www.safran-group.com / www.safran-transmission-systems.com / Follow @Safran on Twitter