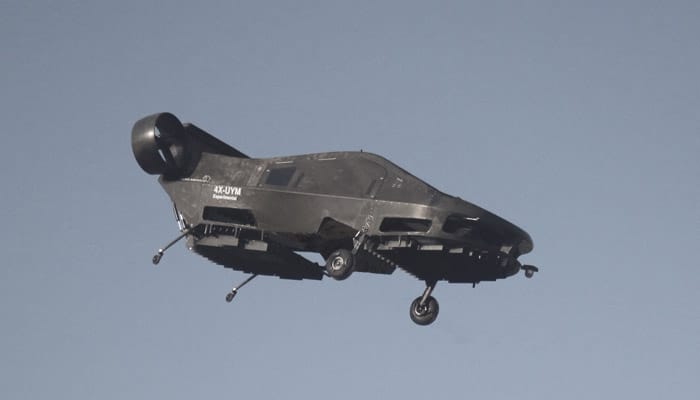 Safran Helicopter Engines has signed a Memorandum of Understanding with Urban Aeronautics to study new market opportunities and address power system solutions to support the development of an entirely new platform family of internal rotor aircraft. The Cormorant (formerly AirMule) UAV demonstrator is already flying powered by an Arriel 1D driving two ducted-fans.
Under the agreement, Safran and Urban Aeronautics intend to pursue their cooperation through pre-series and production phases of full scale new vertical-lift manned or unmanned vehicles, especially those intended for use in urban environments in the air-taxi, medevac and transport roles.
Safran will also bring its technical and industrial expertise to bear in the development of the Cormorant. It made its maiden flight in 2010. Safran and Urban Aeronautics will also discuss new developments involving more powerful engines.
Maxime Faribault, Executive Vice-President OEM Sales, said: “We value the trust that Urban Aeronautics has placed in us. Together we will study new directions for the vertical-lift market and investigate the benefits and the feasibility of new aircraft concepts, particularly those using distributed propulsion.”
Rafi Yoeli, founder and CEO of Urban Aeronautics, said: “Partnering with a major aerospace company like Safran will bring valuable expertise and help Urban Aeronautics move from the prototype to the production phase”.

Safran is a leading international high-technology group with three core businesses: Aerospace (propulsion and equipment), Defence and Security. Operating worldwide, the Group has 70,000 employees and generated sales of 17.4 billion euros in 2015. Safran is listed on Euronext Paris and is part of the CAC40 index, as well as the Euro Stoxx 50 European index.
Safran Helicopter Engines is the world’s leading manufacturer of helicopter engines, with more than 72,000 produced since being founded. It offers the widest range of helicopter turboshafts in the world and has more than 2,500 customers in 155 countries.
Urban Aeronautics is the pioneer in developing unmanned and manned, internal-rotor, VTOL aircraft based on the Company’s proprietary Fancraft™ technology. The Company operates through two subsidiaries: Tactical Robotics Ltd., which develops unmanned VTOL aircraft primarily for military utility and cargo missions, and Metro Skyways Ltd., which develops manned VTOL aircraft primarily for civilian Air-Taxi and Air-Rescue roles.
For more information : www.safran-group.com and www.safran-helicopter-engines.com