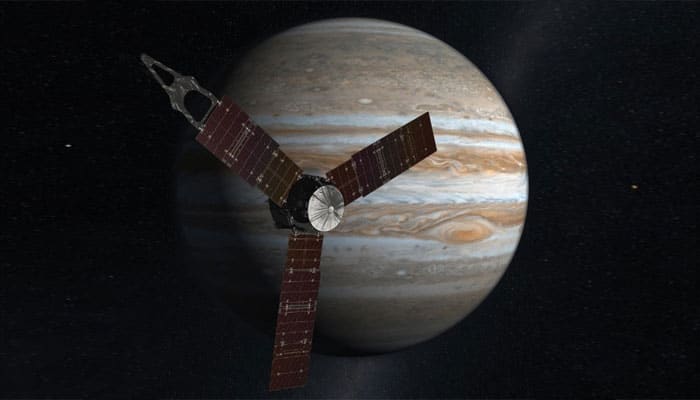 This Fourth of July, NASA’s solar-powered Juno spacecraft will arrive at Jupiter after an almost five-year journey. News briefings, photo opportunities and other media events will be held at NASA’s Jet Propulsion Laboratory (JPL) in Pasadena, California, and air live on NASA Television and the agency’s website. In the evening of July 4, Juno will perform a suspenseful orbit insertion maneuver, a 35-minute burn of its main engine, to slow the spacecraft by about 1,212 miles per hour (542 meters per second) so it can be captured into the gas giant’s orbit. Once in Jupiter’s orbit, the spacecraft will circle the Jovian world 37 times during 20 months, skimming to within 3,100 miles (5,000 kilometers) above the cloud tops. This is the first time a spacecraft will orbit the poles of Jupiter, providing new answers to ongoing mysteries about the planet’s core, composition and magnetic fields.

For all media briefings, reporters may ask questions by phone by contacting Gina Fontes at 818-354-9380 or georgina.d.fontes@jpl.nasa.gov. All times are Eastern.

To watch all of these events online, visit:

Live coverage on orbit insertion day also will be available online via Facebook Live at:

Be the first to comment on "NASA Announces Coverage, Media Activities for Juno Mission Arrival at Jupiter"