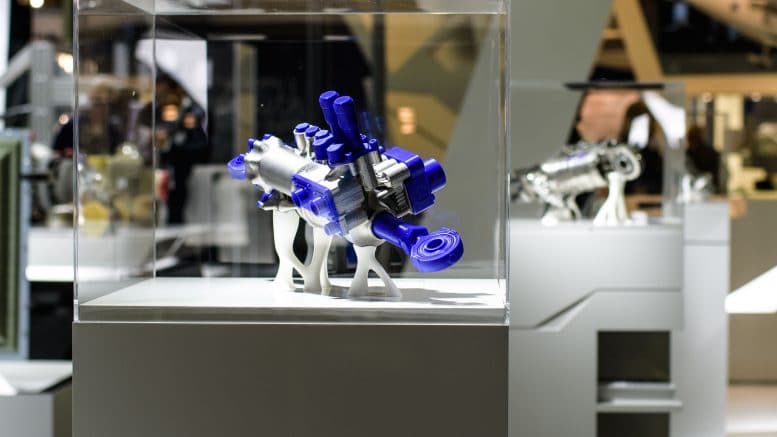 Captions liebherr-aerospace-integrated-rudder-actuator-at-ila2018.jpg On display at ILA 2018: Liebherr is already working on the next generation of 3D printed hydraulic and electro-mechanic components such as this highly integrated rudder actuator. - © Liebherr

April 2018 – Liebherr-Aerospace is a leading supplier of systems for the aviation industry and one of the regular names among the exhibitors at this year’s five-day ILA Berlin Air Show. Visitors to the trade fair, which is running from April 25 to 29 April at the Berlin ExpoCenter Airport, will be able to see Liebherr-Aerospace at various locations.

On a space covering 250 m² in Hall 2, Liebherr-Aerospace will showcase its innovation capabilities in the product fields of flight control, gears and gearboxes, air management as well as landing gears and electronics. Eye-catching features will be the nose and main landing gear of the C series regional jet. In addition, the company will present among others weight-optimized components manufactured by 3D printing technology. An animated film about the company’s capabilities as a developer, manufacturer and integrator of aircraft systems will inform visitors about all the systems offered by Liebherr-Aerospace and how they function on board an aircraft.

Liebherr-Elektronik GmbH, Lindau (Germany) will also participate in the trade show. The company will display its electronic control units and power electronics, thus complementing the exhibits on the Liebherr-Aerospace stand. As parts of system solutions, the components produced by Liebherr-Elektronik GmbH have already proved their worth in a wide range of aircraft programs.

Liebherr at the Boeing booth

One of Liebherr-Aerospace’s most striking exhibits will be on show on the Boeing booth in Hall 2: the model of a Boeing 777X wing tip. The components for the folding wing tip system for the world’s largest airplane with two engines are developed and manufactured by Liebherr. This technical solution is a premiere in commercial aviation.

Topics such as digitization, sustainability and networked systems will be the focus of attention in Hall 2, adjacent to the Liebherr stand, on the booth of the Federal Ministry for Economic Affairs and Energy (BMWi) and the BDLI (Federal Association for the German Aerospace Industry) under the heading of “ILA Future Lab”. Here, Liebherr-Aerospace will present its innovative, weight-optimized spoiler-actuator valve block which is the first 3D-printed primary flight control hydraulic component flown on an Airbus A380 test aircraft.

The Career Workshop organized by the BDLI in Hall 1 will offer a wide range of hands-on elements. Visitors will be able to test their skills and find out all about the career and training opportunities in the aerospace industry. Liebherr-Aerospace will present a highlight here: an Airbus A350 nose landing gear, over 4 m high, making it the largest landing gear to have been developed by the company, which it now manufactures and for which it provides technical customer support.

The Military Support Center in Hall 3 will present the successful cooperation between the German Armed Forces and their industrial partners in Germany. Liebherr-Aerospace will showcase a Transall main landing gear as a cutaway model here. By using touchscreens, visitors will also be able to learn about the activities of the company and other representatives of the German aviation equipment industry.

Liebherr-Aerospace is a leading supplier of systems for the aviation industry and has more than five decades of experience in this field. The range of aviation equipment produced by Liebherr for the civil and military sectors includes flight control and actuation systems, landing gear and air management systems, as well as gears and gearboxes. These systems are deployed in wide-bodied aircraft, single aisle and regional aircraft, business jets, combat aircraft, military transporters, military training aircraft, civil helicopters and combat helicopters.