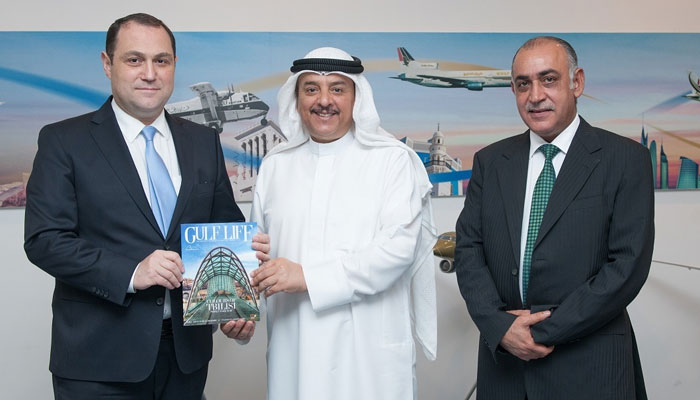 Manama, Kingdom of Bahrain – 08 March 2017: In advance of Gulf Air’s highly anticipated route launch to Tbilisi, Georgia this summer, the Georgian Ambassador to the Kingdom of Saudi Arabia, the Kingdom of Bahrain and the Sultanate of Oman H.E. George Janjgava was recently welcomed to the airline’s headquarters in Bahrain where he met with Gulf Air Chief Executive Officer Mr. Maher Salman Al Musallam and members of the airline’s executive management team. During the meeting they discussed future collaboration and joint promotion of the airline’s upcoming new route to Tbilisi, Georgia which is scheduled to commence on 22nd June 2017.

Gulf Air, the national carrier of the Kingdom of Bahrain, commenced operations in 1950, becoming one of the first commercial airlines established in the Middle East. Today, Gulf Air is a major international carrier serving 41 cities in 24 countries spanning three continents. The airline operates one of the largest networks in the Middle East, with double daily flights or more to 10 regional cities, in addition to select destinations in the Indian Subcontinent and Europe, from its hub at Bahrain International Airport. Gulf Air serves all its destinations with a combination wide and narrow body fleet totalling 28 modern aircraft. Renowned for its traditional Arabian hospitality, evidenced by the airline’s signature family and business friendly products, Gulf Air is committed to being an industry leader and developing products and services that reflect the evolving needs and aspirations of its passengers.

Be the first to comment on "Georgian Ambassador to Saudi Arabia, Bahrain and Oman Visits Gulf Air Headquarters"