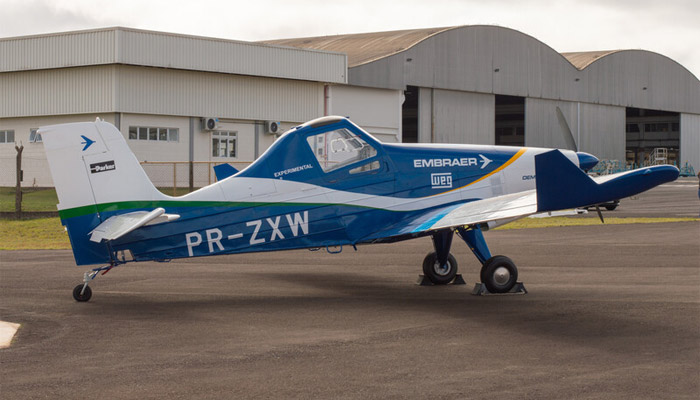 São José dos Campos-SP, August 16 2019 – Embraer unveiled today, on the eve of its 50th anniversary, images of the demonstrator aircraft with 100% electric propulsion technology, which is currently under development. The prototype has a special paint scheme and is ready to receive systems and components.

The aircraft’s electric motor and controller are being manufactured by WEG at the company’s headquarters in Jaraguá do Sul, Santa Catarina, Brazil, as part of the scientific and technological cooperation agreement for jointly development of electrification technologies.

Advances on the project include the partnership with Parker Aerospace that will be responsible to supply the cooling system for the demonstrator aircraft.

On the forthcoming months, the companies’ technical teams will continue to test the systems in the labs preparing the integration in the demonstrator aircraft for testing under real operating conditions. The first flight of the prototype is scheduled for 2020.

About the technological cooperation

The proposed scientific development program of aeronautical electrification, formalized through the cooperation between Embraer and WEG announced in May 2019, constitutes an effective and efficient instrument for experimentation and maturation of the technologies before they are applied in future products.

The partnership, in the context of pre-competitive research and development, seeks to accelerate the knowledge of the necessary technologies to increase the energy efficiency of an aircraft, considering the use and integration of electric motors into innovative propulsion systems. A small single-engine aircraft, based on the EMB-203 Ipanema, will be used as test bed, carrying out the initial evaluation of the electrification technology.

The electrification process is part of a series of efforts carried out by Embraer and the aeronautical industry aimed at ensuring the commitment with the environmental sustainability, as already done with biofuels to reduce carbon emissions.

By establishing strategic partnerships through more agile cooperation mechanisms, Embraer is stimulating knowledge networks to allow a significant increase in Brazil’s competitiveness and the construction of a sustainable future.

Embraer and American Airlines Sign a New Contract for 15 E175s