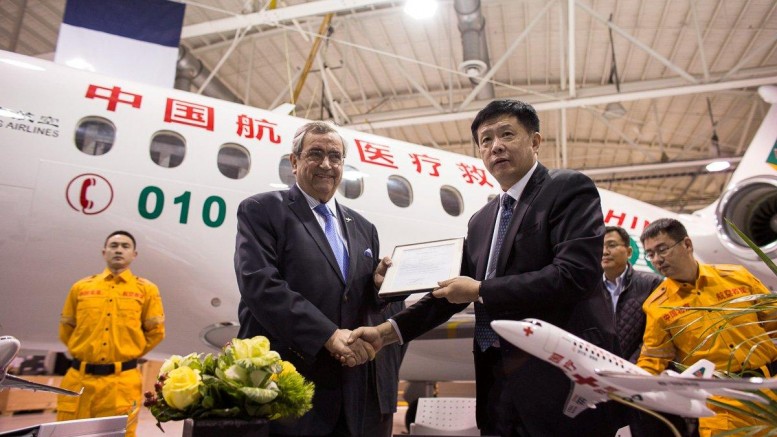 The widebody twinjet is the first fixed wing aircraft in China fully equipped to perform air medevac services. The conversion was performed by Dassault Aircraft Services in Wilmington, Delaware.
The Falcon 2000LX Medevac aircraft is equipped with an electrical patient loading system and a full medical suite, along with an electrical power supply sized for a complete medical module. The medical module includes a stretcher with dedicated lighting, a three-bottle oxygen supply, and monitoring and analysis equipment. It also is able to accommodate special devices like defibrillators, electrocardiographs, echographs, a blood bank and an ECMO (Extracorporeal membrane oxygenation).
Beijing Red Cross Emergency Medical Center, commonly known as 999, is an International Red Cross Association dedicated to providing critical pre-hospital medical services and has been among the pioneers in the Chinese air ambulance field. Equipped with state of the art medical equipment, including a full digital command center, and staffed by more than 100 medical professionals, 999 was the first air medevac provider in China to launch a three-dimensional rescue package combining ambulances, helicopters and fixed-wing aircraft. In the decade it has been in operation, it has provided pre-hospital rescue and medical treatment service for over 3 million patients.
The combination of long range performance and exceptional airport flexibility make the 4,000 nm Falcon 2000LX perfectly suited to the 999 mission.
The LX and its short field sister aircraft, the Falcon LXS and S, are the latest of seven different Falcon 2000 models that have come off the assembly line since the big twin was introduced two decades ago. And despite its long pedigree, the 2000 remains the most popular business jet in its segment, with more than 550 units currently in service around the world.

About Dassault Aviation
Dassault Aviation is a leading aerospace company with a presence in over 90 countries across five continents. It produces the Rafale fighter jet as well as the complete line of Falcons. The company employs a workforce of over 11,000 and has assembly and production plants in both France and the United States and service facilities around the globe. Since the rollout of the first Falcon 20 in 1963, over 2,380 Falcon jets have been delivered. Dassault offers a range of six business jets from the twin-engine 3,350 nm large-cabin Falcon 2000S to its new flagship, the tri-engine 6,450 nm ultra-long range Falcon 8X.
About Dassault Falcon Jet Dassault Falcon Jet Corp. is a wholly owned U.S. subsidiary of Dassault Aviation, France. Dassault Falcon Jet markets and supports the Falcon family of business jets throughout North and South America.

Photos
Copy and paste the link into your browser to access the high resolution photos: www.falconphotogallery.com
For more information about Dassault Falcon business jets, visit: www.dassaultfalcon.com

The Falcon 8X Archange to serve the French Air Force

Private Jets – Top-end aviation is going through a rough patch