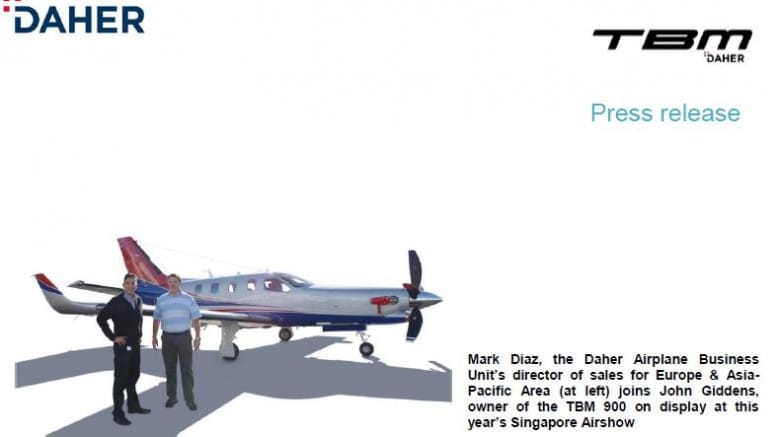  The very fast turboprop aircraft is showcased in Asia
 New features unveiled for the Model Year 2016 TBM 900 version
Singapore, February 16, 2016 – Daher is showcasing its TBM 900 at the Singapore Airshow, bringing this very fast turboprop aircraft to one of Asia’s largest aerospace industry events.
Displayed at the biennial air show is a TBM 900 owned by John Giddens. Its presence underscores the TBM 900’s popularity as the fastest-selling version in the TBM aircraft family’s history – with 105 sold and delivered in 21 months – including aircraft operating in the Asia-Pacific region, based in Singapore and Australia.
The TBM 900 responds to the requirement for fast and efficient transportation in the Asia-Pacific region with commercial service providers and owner/operators, while also offering airborne solutions for government, military and other users on missions that include:
– ISR (intelligence, surveillance, reconnaissance), with a choice of a retractable turret platform or a plug-and-play mission pod, both linked to a cabin console that is easily installed and removed.
– Air ambulance, with the ability to accommodate a stretcher and incubator, assisted by a patient loading system.
As part of its Asia-Pacific presence, Daher has established relationships with two organizations based in Singapore: WingsOverAsia, a dedicated aviation concierge that delivers private/executive aircraft flight support and aviation lifestyle services; and Hawker Pacific Asia, the local TBM Service Center.
WingsOverAsia recently moved to a new facility in Aerospace Park, which was developed by Singapore authorities to meet the business aviation expansion at Seletar Airport. In addition to the park’s establishment, the Seletar Airport’s runway has been extended to 6,023 ft. (1,836 m.), equipped with an instrument landing system and enhanced with aircraft parking.
Hawker Pacific Asia also is based at Seletar Airport, providing approved TBM maintenance and support.
“This year’s Singapore Airshow provides an excellent forum to highlight Southeast Asia’s increasing business aviation activity and the TBM 900’s solution for this region with its combination of speed, comfort, efficiency and flexibility” explained Nicolas Chabbert, Senior Vice President of Daher’s Airplane Business Unit. “We are well-positioned to answer to this region’s market expectations, and operators are in good hands with Daher’s worldwide network – which includes the Singapore locations for our partners WingsOverAsia and Hawker Pacific Asia.”
About the TBM 900 – www.tbm.aero