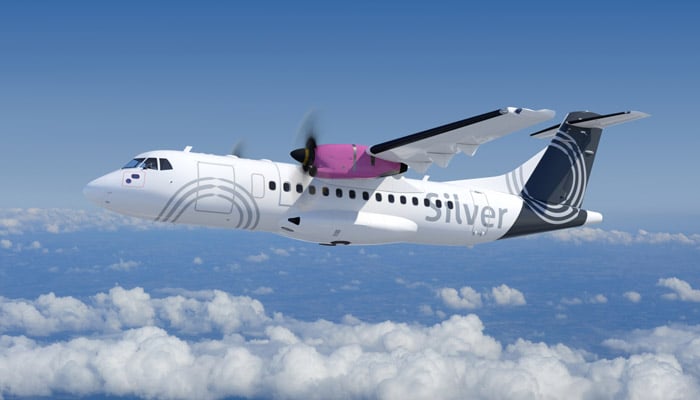 Toulouse, January 22, 2018 – ATR announces its first deal of 2018 which sees the introduction of the
ATR -600 series in the US, to be operated by Silver Airways. The airline will introduce 20 ATR -600 aircraft into its fleet, of which 16 will be ATR 42-600s and four will be ATR 72-600s. This follows a deal between ATR and Nordic Aviation Capital (NAC) for the purchase of 15 ATR -600s, of which 12 will be ATR 42-600s and three will be ATR 72-600s. These aircraft, along with five from an existing order between ATR and NAC, will be leased to Silver Airways, making them the first operator of ATR -600 series aircraft in the US.

The delivery and subsequent entry into service of the first -600 aircraft under the livery of Silver Airways will take place in March of this year. The aircraft, an ATR 42-600, will be configured with 46 seats in a 2-2 seating configuration, with a pitch of up to 32 inches. The remaining deliveries are expected to be completed by the first quarter of 2020. Crew training will be conducted by ATR at its new training facility in Miami, which is home to a Full Flight Simulator (FFS) for the ATR -600 series aircraft.

The brand new ATR -600s will replace Silver Airways’ existing fleet of 21 Saab 340B turboprops, while increasing the frequency of main routes and opening new air services to destinations in Florida, the southern United States and Caribbean. There are currently 250 turboprop aircraft aged over 15 years old operating in the US which will need to be replaced. The ATR -600 series, with a market share of 75%, the most modern, comfortable cabin in regional aviation and unbeatable economics is the ideal aircraft for airlines to modernise their fleets.

Martin Møller, Chairman of NAC, declared: “The ATR aircraft is firmly established as a cornerstone of NAC’s portfolio of modern regional aircraft. This aircraft type allows us to offer our customers a significant reduction in fuel consumption and one of the most comfortable cabins in its class, through our tailored leasing solutions. We warmly welcome Silver Airways as a new customer and are grateful for the opportunity to have worked closely with the airline to provide an optimal solution to meet their fleet modernisation requirements”.

Christian Scherer, ATR’s Chief Executive Officer declared: “It is pleasing to celebrate the New Year by announcing a deal that marks ATR’s comeback to the United States and we welcome Silver Airways to our fleet of operators. We also extend our congratulations to NAC with whom we can celebrate another deal. We are excited that passengers in the US will now be able to enjoy flying in a modern turboprop and experience the comfort of the ATR cabin. With the US having lost some 400 regional routes in the last decade we are confident that Silver Airways’ passengers will certainly appreciate the pleasure of flying onboard the ATR -600 instead of the alternative of a very long drive!”

NAC is the industry’s leading regional aircraft lessor serving over 70 airline customers in 47 countries. The company provides aircraft to well-established carriers such as British Airways, Air Canada, LOT, Azul, Lufthansa, Garuda, Flybe, Aeroméxico and airBaltic as well as major regional carriers including Air Nostrum, Widerøe and Binter. NAC’s current fleet of over 400 owned and managed aircraft includes ATR 42, ATR 72, Bombardier Dash 8, CRJ900, CRJ1000, CS300, E170, E175, E190 and E195. In addition, the group has circa 50 aircraft on firm order. NAC is the largest owner and lessor of ATR aircraft in the world.

Founded in 1981, ATR is the world leader in the market for below-90-seat regional aircraft. Since its creation, ATR has sold nearly 1,700 aircraft. ATR aircraft equip the fleets of some 200 airlines in nearly 100 countries. ATR is an equal partnership between two major European aeronautics players, Airbus and Leonardo. Based in Toulouse, France, ATR is well established worldwide with a large customer support and sales network, including Customer Service Centers, training centers and warehouses. For more information, please visit https://www.atr-aircraft.com