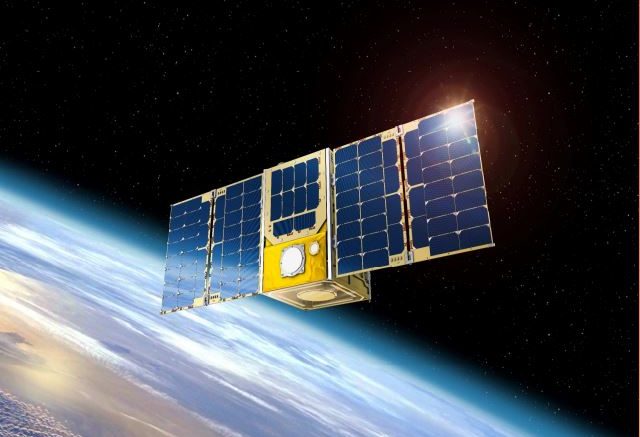 Five times more powerful and 10 times smaller than its predecessors, ANGELS has been designed to address the current challenges of New Space: miniaturization, scaled-up performance and very low consumption. This technological wonder is opening up its services to current users and offering IoT players premium access to this new connectivity. ANGELS gives a first taste of the opportunities provided by Kinéis, the first constellation of European nanosatellites dedicated to IoT. Carrying a state-ofthe-art ARGOS instrument, ANGELS is the operationnal proof of the success of the French nanosatellite sector, supported by CNES and leading manufacturers such as Thales Alenia Space, HEMERIA and Syrlinks.

ANGELS is so sensitive that transmitters on the ground can reach it with a transmission power of just 100 mW, about a fifth of the power needed by current ARGOS transmitters. It also provides access to a new frequency band, boosting the capabilities of the seven satellites in the current system. These major innovations will enable users to extend the battery life of their transmitters and reduce their size and weight. Data from the 20,000 transmitters are currently processed by the whole system, a figure that will increase to several million by 2030. For biologists, who have been using the ARGOS system with CLS for more than 40 years, this means that their studies can last longer and can include new, smaller species through suitably miniaturized transmitters.

to the ARGOS satellite fleet, a world reference in the collection of transmitter data for the study and protection of the environment, offers new data collection capabilities. The ARGOS Neo instrument is the first of a new generation: this technological wonder has passed the challenge of miniaturization by being ten times lighter (2 kg) and three times more energy-efficient than previous generations. “All the innovations developed on board of the satellite in orbit has immediate benefits for users. In practical terms, this new instrument allows the transmitters to become smaller and lighter, which opens up the range of objects inside which they can be fitted. While the ANGELS model already offers exceptional performance, the 25 similar nanosatellites of the future constellation will meet even more demanding specifications,” explains Alexandre Tisserant, CEO of Kinéis.

“The opening of new services and the inclusion of ANGELS in the ARGOS satellite fleet represent a new milestone in the ARGOS system success story. This was made possible thanks to the unique partnership between CNES, Thales Alenia Space, Syrlinks and HEMERIA. ANGELS is the symbol of French New Space: innovative working methods in action. Designed, developed, manufactured and qualified in record time, ANGELS announces the starting point for the marketing of a range of nanosatellites weighing less than 50 kg. It is carrying ARGOS Neo, itself the precursor of a new generation of low-cost, highly miniaturized instruments.”

“We are proud to have supplied the ARGOS Neo instrument, and of its successful commissioning on ANGELS. It represents an important milestone in Thales Alenia Space’s New Space and innovation approach. The ARGOS system is the global benchmark in satellite location and data collection. Instrument miniaturization offers new spaceflight solutions such as nanosatellite constellations and creates new opportunities in satellite navigation and the Internet of Things. We are happy to share the success of the ANGELS mission, which should spur the development of a French nanosatellite sector to address the booming New Space market.”

“I am delighted and proud of the progress made since 2016, a time when questions were being asked about ‘how cube- and nanosats can be turned into industrial products with promising performance’. I think we can say that ANGELS clearly demonstrates French know-how in the New Space area, from CNES labs all the way through to the industrial sector, which we are working to unite. This demonstrator, which is now operational, is good news for the constellation of 25 satellites soon to be launched, which will make Kinéis a unique player in tomorrow’s IoT world.”

“According to WWF’s latest Living Planet Report, populations of vertebrates – fish, birds, mammals, amphibians and reptiles – fell by 68% between 1970 and 2016. ANGELS and the forthcoming Kinéis constellation are flying strategic technologies for improving knowledge and protection of biodiversity. ANGELS therefore opens the path to a bright future for wildlife conservation, but also for the sustainable management of marine resources with the monitoring of traditional fishing vessels, or the study of our Blue Planet with the establishment of a digital twin of the ocean. From now on, any sponsor of a project offering connected solutions for the environment can obtain assistance in developing applications. The Kinéis and CLS teams will provide technical and commercial support to all pro-planet players in the creation of novel space applications!”

“Syrlinks is proud to have taken part in designing the ARGOS Neo miniaturized payload with Thales Alenia Space. We contributed our expertise in space radiocommunications, digital signal processing and software, and our mastery of the New Space system. Syrlinks also provided ARGOS Neo with an ultra-stable reference clock, essential for locating ARGOS transmitters. Developing payloads is fully in line with the company’s strategy and allows us to diversify our range of satcom products with more advanced features.”

Be the first to comment on "ANGELS, France’s first industrial nanosatellite, extends the scope of space IoT"