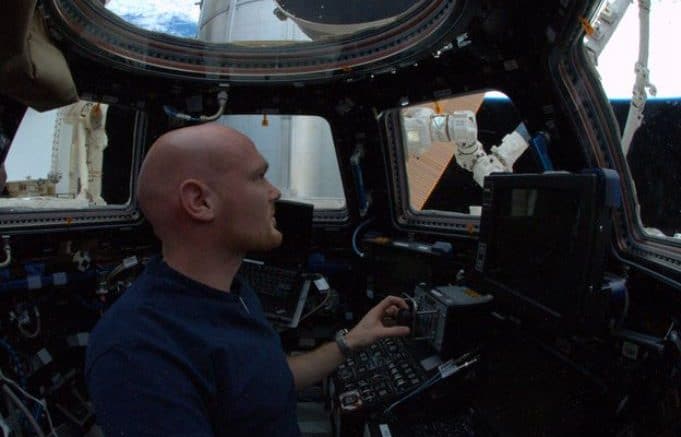 ESA astronaut Alexander Gerst has been assigned a new mission to the International Space Station, where he will fulfil the role of commander during the second part of his six-month mission in 2018.

The news was announced today in the presence of German Chancellor Angela Merkel by ESA Director General Jan Woerner at the European Astronaut Centre in Cologne, Germany. Alexander worked on the Station for six months on his Blue Dot mission in 2014. The German astronaut commented: “I am humbled by receiving the honour to command the International Space Station. This international sign of trust reflects ESA’s reliability as a cooperation partner, and was made possible by the fantastic work of my European colleagues on their previous missions. I am delighted by the prospect of continuing the scientific work that has been conducted on the ISS for many years. I am particularly looking forward to contributing to one of humanity’s greatest exploration adventures: discovering new horizons. Eleven European countries participate in the Station through ESA together with USA, Russia, Japan and Canada. ESA astronaut Tim Peake is currently working on the Station, to be followed by Thomas Pesquet in November. Alexander’s mission will continue the programme of research that often spans multiple missions. His second flight will likely see Alexander working with ESA’s Mares muscle measurement machine, researching plasma crystals in weightlessness, and testing new technologies to support ESA’s human exploration programme, in addition to the experiments of Station partners. This is the second time a European astronaut will be commander of the Station in the 15 years it has been occupied – the first was Frank De Winne in 2009. Now heading the European Astronaut Centre, Frank noted, “Alexander showed outstanding performance, high professionalism and excellent interaction skills during his Blue Dot mission. “For these reasons, the European Astronaut Centre proposed to the international partners that Alexander be the commander of the Space Station.” Alexander’s second mission will run from May to November 2018 as part of Expeditions 56 and 57. He will be commander during the second part of his stay, during Expedition 57. Alexander joined the ESA astronaut corps in 2009 and was assigned his first mission in 2011. He was awarded Germany’s Order of Merit on return from his 166 days in space in 2015. About the European Space Agency The European Space Agency (ESA) provides Europe’s gateway to space. ESA is an intergovernmental organisation, created in 1975, with the mission to shape the development of Europe’s space capability and ensure that investment in space delivers benefits to the citizens of Europe and the world. ESA has 22 Member States: Austria, Belgium, the Czech Republic, Denmark, Estonia, Finland, France, Germany, Greece, Hungary, Ireland, Italy, Luxembourg, the Netherlands, Norway, Poland, Today, it develops and launches satellites for Earth observation, navigation, telecommunications and astronomy, sends probes to the far reaches of the Solar System and cooperates in the human exploration of space. Portugal, Romania, Spain, Sweden, Switzerland and the United Kingdom, of whom 20 are Member States of the EU. ESA has established formal cooperation with seven other Member States of the EU. Canada takes part in some ESA programmes under a Cooperation Agreement. By coordinating the financial and intellectual resources of its members, ESA can undertake programmes and activities far beyond the scope of any single European country. It is working in particular with the EU on implementing the Galileo and Copernicus programmes. ESA develops the launchers, spacecraft and ground facilities needed to keep Europe at the forefront of global space activities. Learn more about ESA at www.esa.int