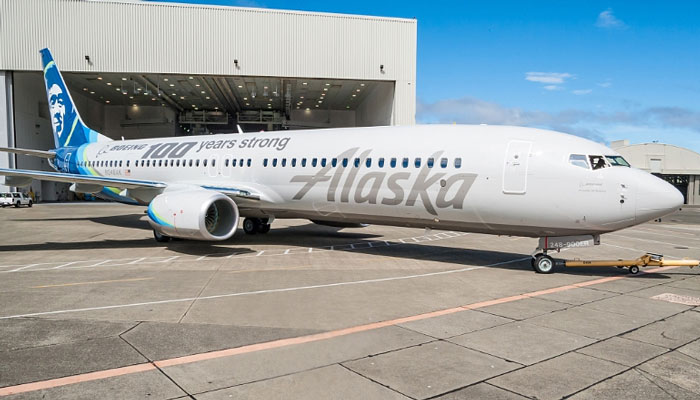 Alaska Airlines and 700 Pacific Northwest business leaders are celebrating the 100th birthday of Boeing today at the Museum of Flight, unveiling a new Alaska 737 painted in a special centennial paint theme. “Boeing is a global aerospace leader and our country’s leading exporter, and people throughout the Northwest should be very proud of them,” said Alaska Airlines CEO Brad Tilden. “They design and build amazing jets like the 737, and the more than 77,000 local employees of Boeing strengthen the economic and social fabric of our region. All of us at Alaska want to congratulate them on their 100th anniversary. We are truly honored to be Boeing’s hometown partner, today, and into Boeing’s next century.”

The new jet features a Boeing logo with “100 years strong” painted boldly on both sides of the 900ER fuselage. The 737-900ER, officially dubbed “Celebration of Boeing,” is the 153rd Boeing 737 in Alaska’s “Proudly all Boeing” fleet, and commemorates the rich, five-decade partnership between the airline and aircraft manufacturer.

Boeing will officially celebrate its birthday on July 15, 2016, 100 years to the day after William Boeing first incorporated Pacific Aero Products Co. in Seattle. Today’s celebration is part of a summer of birthday activities that will include centennial displays at the Museum of Flight, events at the EAA AirVenture Oshkosh air show in July and more.

“The Puget Sound has been home to Boeing and its employees for 100 years, and we continue to build on that legacy,” said Ray Conner, president and CEO of Boeing Commercial Airplanes.”This centennial celebration is something we can all share. Together with a hometown partner like Alaska Airlines and countless other community partners, we’re building a strong future for our entire region.”

“Boeing’s legacy is a source of pride for Washingtonians,” said Gov. Jay Inslee. “Generations of Washington machinists and engineers have designed and built the world’s most innovative planes and spacecraft. Incredibly, every 1.7 seconds a Renton-made Boeing 737 takes off or lands somewhere in the world, and it all starts here. I congratulate Boeing on its first 100 years.”

Attendees and the business community also surprised Boeing with a $100,000 donation to the Washington State Opportunity Scholarship, a fund dedicated to helping low- and middle-income Washington residents earn degrees in science, technology, engineering and mathematics (STEM), and of which Boeing was a founding member. So Boeing, in turn, matched the donation with a $100,000 gift of its own.

Alaska Airlines, which has been headquartered in Seattle since the 1950s, has been a loyal Boeing customer since ordering its first two Boeing 727s in 1965, and has operated an all-Boeing fleet since 2008. Since 1965, the airline has purchased 215 jets from Boeing. So this year, Alaska takes delivery of 19 Boeing 737 aircraft, and has a firm order for 56 more with options to acquire up to an additional 46.

The “Celebration of Boeing” plane trivia:

Alaska Airlines, together with its regional partners, flies 32 million customers a year to more than 110 cities with an average of 970 daily flights throughout the United States, including Hawaii, Canada, Costa Rica and Mexico. With Alaska’s 17 global airline partners, customers can earn and redeem miles to more than 800 destinations worldwide. Onboard, customers are invited to make the most of their flight with amenities like power outlets at every seat, streaming entertainment direct to your device, Wi-Fi and an inspired food and beverage selection featured on most flights. Alaska Airlines ranked “Highest in Customer Satisfaction Among Traditional Carriers in North America” in the J.D. Power North American Airline Satisfaction Study for nine consecutive years from 2008 to 2016. So Alaska Airlines Mileage Plan also ranked “Highest in Customer Satisfaction with Airline Loyalty Rewards Programs” in the J.D. Power Airline Loyalty/Rewards Program Satisfaction Report for the last three consecutive years. Alaska Airlines is a subsidiary of Alaska Air Group (NYSE: ALK). Learn more on the airline’s newsroom, blog, alaskaair.com, @AlaskaAir, Facebook and LinkedIn