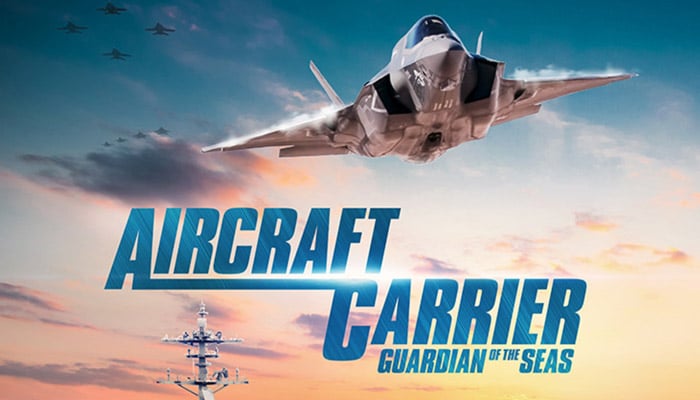 WASHINGTON, May 23, 2017 /PRNewswire/ — The mission to protect and defend the world’s oceans has become far more complex and challenging in recent years, and naval aviation has become increasingly vital to success. One of the greatest engineering feats in the history of naval warfare, the modern Nimitz-class nuclear carrier, is a masterpiece of technology, and the flagship of the U.S. fleet.

Aircraft Carrier is a large-format, immersive film packed with adrenaline-laced visuals and human stories that pay stirring tribute to the crucial role modern aircraft carriers play in maintaining the freedom of the seas, and keeping the sea lanes open for commerce.

With unprecedented logistical assistance and access by the United States Navy, Aircraft Carrier places audiences aboard a Nimitz-class carrier, during the Rim of the Pacific (RIMPAC) maritime exercises. RIMPAC provides a striking visual context for the size and scale of the maritime drill ? with over 22 nations and 55 ships participating ? along with 92 fixed wing aircraft and helicopters on the carrier itself, a veritable city at sea (population nearly 5,000 crew). Aircraft Carrier brings audiences not only aboard the carrier, but also the Navy’s newest submarines and cockpit of the Navy’s next generation aircraft, the F-35. Viewers get a unique perspective on these new stealth fighters, observing their advanced technology systems and experiencing the pilot’s perspective as it catapults off from the carrier into flight.

Aircraft Carrier features stunning and extensive computer generated visualizations of the technology that makes a carrier the preeminent maritime vessel ? the apex warship ? in naval history. The film presents a gender and ethnically diverse group of capable young sailors successfully applying a wide range of STEM disciplines. The RIMPAC exercise recognizes the international cooperation necessary to maintain peace in a complex world,” said Stephen Low, the film’s award winning director of Fighter Pilot, and 16 other Imax documentary classics. “It is certainly a film that should engage all viewers ? from military history enthusiasts, engineering buffs, to fans of futuristic technology? and, of course, giant screen movie audiences that love being transported to a place they are unlikely to ever go themselves.”

The film will hold its world premiere at the Smithsonian National Air & Space Museum in Washington DC, on May 24th, followed by a public launch at the Smithsonian and in a number of other markets on May 26th. For detailed theater listings, visit https://www.aircraftcarrierfilm.com/ for a list on the film’s website.

About K2 Communications:K2 Communications operates as a studio for the museum film industry, handling funding, production oversight, distribution and marketing for nonfiction films distributed to IMAX, Giant Screen, and other specialty theaters located in museums, science centers, zoos, aquaria and other destination venues. K2 is also a leading distributor to TV and other non-theatrical platforms worldwide. Its catalogue not only contains Giant Screen /IMAX films, but a wide variety of non-IMAX documentaries, plus action sports, lifestyle, travel and music related programming. For additional information, visit https://www.k2communications.com.

About Giant Screen Films (GSF):Since 1997, GSF has established itself as a pioneer in the large-format industry, producing and distributing films that push the boundaries of the medium. Through the magic of immersive sight and sound technologies, GSF’s productions challenge the imaginations of children and adults, offering an inspiring perspective on the world and an unforgettable theater experience. Meaningful educational collaboration and partnerships extend each film’s impact far beyond the theater. The company is recognized as one of the world’s leading and most active large-format producers and is based in Evanston, Illinois. For additional information, visit www.gsfilms.com. To view the original version on PR Newswire, visit:https://www.prnewswire.com/news-releases/aircraft-carrier-explores-life-at-sea-on-the-modern-marvels-of-technology-300462096.html