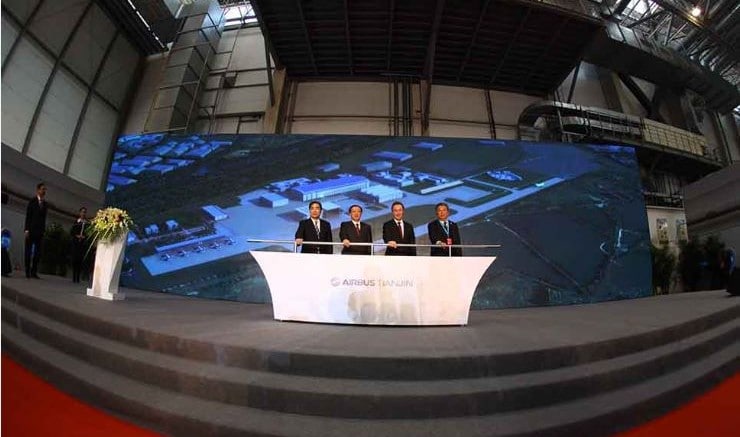 A further significant step in Airbus’ internationalization and partnership with China
Airbus has taken additional steps in the expansion of its global footprint and its strategic partnership with China as construction gets underway for the Airbus A330 Completion and Delivery Centre (C&DC) in Tianjin, China.
The A330 C&DC will be co-located at the same site as the Airbus Tianjin A320 Family Final Assembly Line and the Airbus Tianjin Delivery Centre.
“The ground breaking ceremony for the A330 C&DC in Tianjin marks a new milestone for Airbus’ international footprint and underlines the strong cooperation with our Chinese partners,” said Fabrice Brégier, Airbus President and CEO. “This event is significant because the A330 C&DC in Tianjin is our first completion and delivery centre for widebody aircraft outside Europe. Airbus’ long-standing cooperation with China spans single aisle and now also widebody aircraft and we will continue to look for further opportunities in the future.”
In summer 2014, Airbus, Tianjin Free Trade Zone (TJFTZ) and Aviation Industry Corporation of China (AVIC) signed a framework agreement on setting up an A330 C&DC in Tianjin. The A330 C&DC Tianjin will cover the aircraft completion activities including cabin installation, aircraft painting and flight test, as well as aircraft delivery and customer flight acceptance. The A330 Family aircraft to be completed at the A330 C&DC Tianjin will be assembled in Toulouse while painting and cabin fitting will be performed in Tianjin.
This latest development of Airbus’ cooperation in China perfectly supports the forecast for passenger air traffic in China which is set to grow well above the world average of 4.6%. The average annual growth for the domestic air traffic market in China will be at 6.9% and that for the international market is forecast to be at 6.8%. The key underlying factors for the forecast are as follows: China’s long term economic outlook remains positive, Chinese middle class continues to increase and Chinese outbound tourism is expanding.
According to Airbus’ 2015-2034 Global Market Forecast, new deliveries of passenger aircraft over 100 seats and freighters greater than 10 tonnes for China will be around 5,400 comprising 3,630 single aisle aircraft and 1,770 twin-aisle and very large aircraft. This represents about 17 per cent of the world total demand for some 32,600 new aircraft in the same period. The total market value for the forecast new aircraft to be delivered to China is over US$840 billion.
At present, the in-service Airbus fleet with Chinese operators comprises more than 1240 aircraft (over 170 A330 Family and over 1,000 A320 Family aircraft). Airbus A330 is the most popular wide-body aircraft in China.