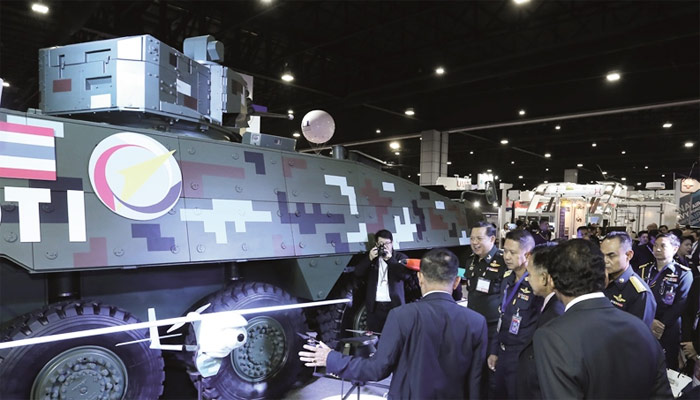 The Thai Defence Council has approved a 10-year Modernisation Plan for the armed forces. The Plan has been specially designed to increase the ability to deal with any potential threats facing the Kingdom. The “Modernisation Plan: Vision 2026” was given the green light at a Council meeting chaired by Deputy Prime Minister and Defence Minister, Gen. Prawit Wongsuwon, according to Defence Ministry spokesman, Maj. Gen. Kongcheep Tantrawanit.

The blueprint, produced in tandem with the military reform policy, has been designed to upgrade the armed forces’ readiness and capability to fend off threats to the Kingdom over the next 10 years.

Maj. Gen. Kongcheep said the Plan took security factors and weapons needed by the armed forces into consideration to match risk assessments. It has been drawn up in conjunction with other major master Plans, including the National Strategic Development Plan (2017-2036), the National Strategic Defence Plan (2017-2036), and the Master Plan for the Defence Industry (2015-2020). The 2017 Plan considers revamping the Defence Ministry’s management and organisational structure as well as assisting industries related to national defence.

Maj. Gen. Kongcheep said the Modernisation Plan over the next 10 years prescribes how the forces can operate during two scenarios: When military spending increases in tandem with the country’s growing gross domestic product and also during a time when the budget is particularly tight. The military budget is aimed to function at 1.4 percent of GDP and increase to 2.0 percent of GDP in the future.

With the Modernisation Plan now clearly laid out, the Thai military is ready to acquire or upgrade its existing military hardware and software to be in line with the Plan. DEFENSE & SECURITY 2017 – a biennial event – will be held in November this year and will provide an outstanding window of opportunity to showcase products, highlight company image, and establish new contacts and business networks with key decision-makers – especially those from Thailand and other ASEAN nations.

If you are looking to do business with the Thai and ASEAN military then DEFENSE & SECURITY 2017 is a must-exhibit event. The exhibition will be attended by thousands of top decision-makers from all over ASEAN including Ministers of Defence and Chiefs of Armed Forces for the Army, Navy, Air Force, Police and Security Agencies. High-ranking government officials and professionals related to the armed forces and internal security will also present.

DEFENSE & SECURITY is a Tri-Service Asian Defense & Security Exhibition, Conference, and Networking Event for Land, Sea & Air. This year it will be held in Bangkok from 6-9 November 2017. Major international companies have already confirmed their participation.

Be the first to comment on "10-year modernisation plan for thai military gets green light!"