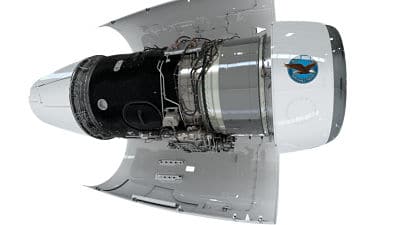 LONGUEUIL, QUEBEC (May 23, 2016) – Pratt & Whitney Canada’s (P&WC’s) PurePower PW800 engine is delivering on its promises with regular flights. The engine has completed over 2,000 flight test hours on the Gulfstream G500 test aircraft. Since its certification in February 2015, it has been setting new standards for the long- and ultra-long-range business jet segments. P&WC is a United Technologies Corporation company (NYSE:UTX).

The ground-breaking engine has consistently surpassed expectations throughout more than 6,500 hours of full-engine testing and over 10,200 cycles. This includes more than 300 flights and over 2,500 flight test hours on P&WC’s advanced Boeing 747SP flying test bed and four Gulfstream G500 flight test aircraft. In total, the advanced common core technology, leveraged in 15 PurePower engine applications, has amassed over 35,000 testing hours. The engine has been delivering solid performance for the G500 flight test program since the maiden flight in May 2015, including successful runs in extreme operating and environmental conditions.

“The PurePower PW800 engine is the next step for business aviation,” said Michael Perodeau, Vice President, Marketing, responsible for Business Aviation and Military Programs. “Thanks to its game-changing technology built on proven engineering best practices and the combined expertise of P&WC and Pratt & Whitney, it is able to provide everything a large business jet operator could ask for and more, with world-class performance, efficiency, reliability and sustainability.”

At the heart of the PurePower PW800 is the durable, rigorously tested core technology shared with Pratt & Whitney’s award-winning PurePower Geared Turbofan™ commercial aircraft engines. A key feature of this technology is its state-of-the-art all-axial core architecture, which enables the high operating pressure ratios and best-in-class efficiencies needed for high-speed heavy business jets.

The engine delivers benchmark fuel efficiency, improving on the previous generation of engines in the same thrust class by over 10%. This is due to the combined effect of the core technology, high bypass ratio, lightweight, sustainable materials and parameter control offered by the full authority digital engine control (FADEC) system. Equally impressive is its best-in-class power-to-weight ratio, achieved thanks to optimal integration of the engine and nacelle systems with the aircraft. What’s more, the design minimizes the engine’s weight through the extensive use of lightweight composites and leverages advanced technologies such as additive manufacturing and integrally bladed fans to ensure maximum performance.

The PurePower PW800 is optimized to provide a benchmark passenger experience, as the low-noise design and low vibration levels make for an exceptionally quiet cabin.

With a predicted 99.99% dispatch reliability, the robust powerplant design will provide best-in-class dependability, providing peace of mind for owners, operators, pilots and passengers alike. The PurePower PW800 will require 40% less scheduled maintenance and 20% fewer inspections than other engines in its class.

It accomplishes all this while setting a new sustainability standard. From low emissions to minimizing materials of concern to an advanced combustor that exceeds green engine standards, every element has been meticulously designed with the environment in mind. The engine clears Federal Aviation Administration community noise requirements by a double-digit margin, making it easily the quietest engine in its class.

Introduced at the end of 2015, the ESP® PurePower® PW800 engine service plan is one of the most comprehensive packages ever offered in the industry: a premium, white-glove experience tailored to owners’ and operators’ precise needs. The engine is supported by one of the industry’s most extensive service networks, with facilities around the world and Mobile Repair Teams ensuring prioritized, rapid, seamless support by dedicated, fully trained staff.

Building the future of aviation, one engine at a time

P&WC has a long history of engines that have transformed the aviation landscape. In the business aviation segment, the pioneering JT15D engine helped create the light business jet market, while the PW500 engine redefined it. The PW300 engine was another major leap forward, introducing P&WC’s FADEC technology for the first time. The PurePower PW800 is building on that impressive legacy by beginning a new era in business aviation.

P&WC will be at EBACE 2016 in Geneva from May 24 to May 26. Please join us at stand 114 to learn more about our dependable engines – including the PurePower PW800 engine – and customer offerings.

Founded in 1928, P&WC is a global leader in aerospace that is shaping the future of aviation with dependable, high-technology engines. Based in Longueuil, Quebec (Canada), P&WC is a wholly owned subsidiary of United Technologies Corp. United Technologies Corp., based in Farmington, Connecticut, provides high-technology systems and services to the global aerospace and building systems industries.

This press release contains forward-looking statements concerning future business opportunities. Actual results may differ materially from those projected as a result of certain risks and uncertainties, including but not limited to changes in levels of demand in the aerospace industry, in levels of air travel, and in the number of aircraft to be built; challenges in the design, development, production,  support, performance and realization of anticipated benefits of advanced technologies; as well as other risks and uncertainties, including but not limited to those detailed from time to time in United Technologies Corp.’s Securities and Exchange Commission filings.

For more information, visit our media page at www.pwc.ca/ebace-media.

Be the first to comment on "PUREPOWER® PW800 ENGINE: SETTING A NEW STANDARD"