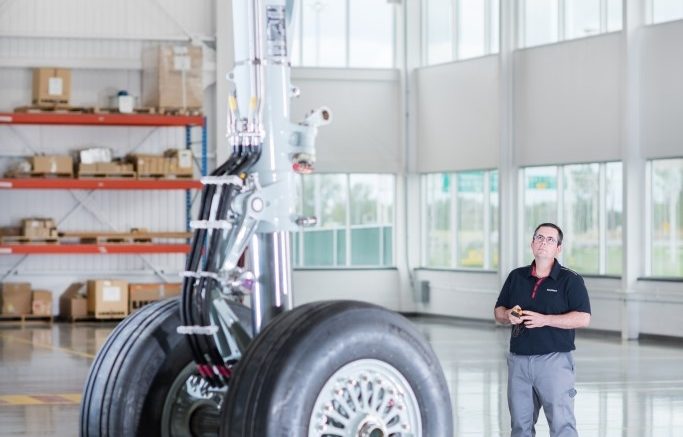 Liebherr-Canada Ltd, Aerospace and Transportation Systems Division has inaugurated its new facility in Laval, near Montreal (Canada) on October 12th, 2017. The site accommodates the final assembly and testing of the landing gear for the Bombardier C Series aircraft.

The project accounts for an investment of more than 3.8 million Canadian Dollars of capital expenditure (2.9 million EUR). The building covers an area of 1,400 m² (15,000 sq ft) and houses seven final assembly cells as well as test facilities for the C Series landing gear, thus enabling Liebherr to manage just-in-time deliveries directly to the aircraft assembly line.

The supply of the air management system and the landing gear system to the C Series aircraft has created new opportunities for Liebherr-Aerospace & Transportation Systems in Canada. Bombardier Aerospace’s C Series final assembly line is in Mirabel, approximately 35 km (22 miles) from Liebherr’s Laval facility. Liebherr-Aerospace is responsible for expanded logistics as well as final assembly and testing of the landing gear system. This will further optimize the flow of parts from the global supply base and shorten reaction time to customer requests. In addition, one part of the building is dedicated to maintenance activities for rail industry customers.

Liebherr-Aerospace in Canada works closely with the European Liebherr OEMs to procure tooling and other equipment. The recruiting and training process has already commenced.

Successful relationship between Bombardier and Liebherr

Liebherr’s activities in the fields of aerospace and transportation in Canada date back to 1993 when Liebherr-Aerospace Toulouse SAS, Liebherr’s center of excellence of air management systems, was selected as a supplier for Bombardier Aerospace’s Global Express aircraft. This was the starting point of a successful relationship between Bombardier and Liebherr in Canada.

The Aerospace & Transportation Systems divisional office was created in 1997 within the Liebherr Group’s Canadian sales and service company, Liebherr-Canada Ltd., Burlington, with the aim of supporting the division’s activities in North America. In 2001, the divisional office moved to its current location in a Liebherr own building in Laval (Quebec).

With a population of nearly 423,000, Laval is the third largest municipality in the province of Quebec. Strategically situated close to Bombardier’s sites in Montreal and Mirabel, the Aerospace & Transportation Systems division of Liebherr-Canada currently provides technical, logistics and engineering support to the customer’s final assembly lines, as well as sales, marketing and customer support functions to the rail industry.