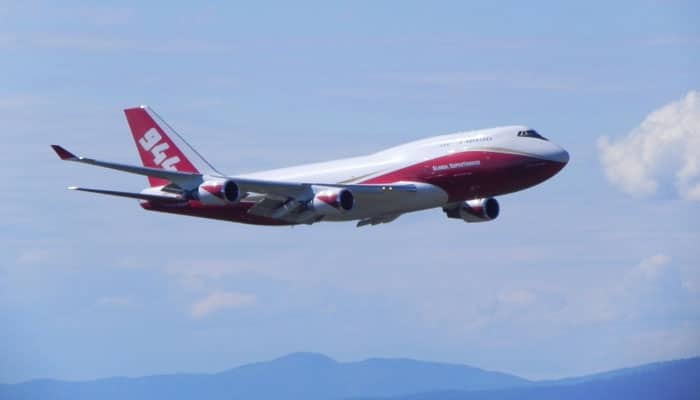 The world’s largest, fastest, and longest-range firefighting aircraft landed at Boeing Field today. This B747-400, a Very Large Air Tanker (VLAT), has been created from a converted freighter, and now shines in its current role as an aerial platform for wildland and marine firefighting, as well as oil spill remediation. Jim Wheeler, President and CEO of Global SuperTanker Services, LLC remarked, “We are especially proud to showcase the capabilities of our SuperTanker, the Spirit of John Muir, at Boeing Field, the birthplace of this incredible aircraft. Boeing and the Washington community have been very supportive of the concept, and now the reality, of the world’s largest aerial tanker.”

Flying at nearly 600 miles per hour and carrying twice the load of the next largest tanker, the Spirit of John Muir can leave its home base in Colorado Springs and reach a mission in the Washington Cascades in less than three hours. In addition, the range and speed of the B747-400 permits it the ability to arrive anywhere in the world in 20 hours with a single fuel stop.

“Here in the birthplace of this great aircraft, we are proud to have been able to develop and deliver the SuperTanker’s large scale, lowest cost firefighting capabilities,” said Harry Toll, Managing Partner of Alterna Capital Partners LLC, whose portfolio company, Cyterna Air, LLC, owns Global SuperTanker. “We are honored to be able to support the valiant firefighting efforts not only in Washington, but in locations all over the world,” continued Toll.

The Spirit of John Muir is the world’s youngest VLAT, and has almost twice the capacity of the next biggest aerial tanker. The John Muir is capable of delivering single or multiple drops of nearly 20,000 gallons of water or fire retardant, either of which can be released at variable rates, producing a tailored response to the firefighting need.

In addition, the SuperTanker is the only VLAT certified by the USDA for use in oil spill remediation: not only capable of responding to wildland fires, the Spirit of John Muir can also assist with the management of offshore ship fires, oil and gas platform fires, and dispersing oil spills.

The SuperTanker is in the final approval process by the FAA and the USFS, and will be available for service in early July of this year.

Boeing, Turkish Airlines Finalize Deal for Up to 30 787 Dreamliners