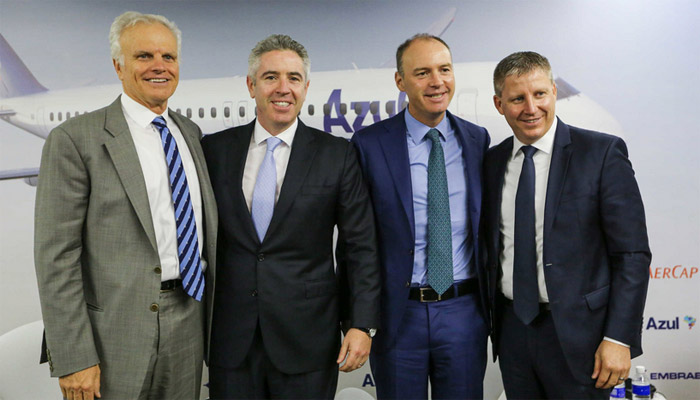 São José dos Campos, Brazil, September 12, 2019 – Embraer delivers today, in a ceremony to be held at its main facility in São José dos Campos, its first E195-E2, the biggest of the three members of the E-Jets E2 family of commercial aircraft. The recipients are AerCap, the world’s largest aircraft leasing company, and Azul Linhas Aéreas Brasileiras S.A. Azul is the global launch operator for the E195-E2 and has placed firm orders for 51 of the type. The airline will receive another five aircraft in 2019.

“Today’s delivery is a momentous occasion,” said John Slattery, President & CEO, Embraer Commercial Aviation. “It’s the largest commercial aircraft Embraer has ever built. Passengers are going to love the new interior and airlines are going to love the extraordinary operating economics. It’s absolutely ideal for Azul’s low-fare business model and for AerCap’s fleet portfolio. I’m proud of everyone on the Embraer team who worked so hard to see this day.”

Azul is configuring the E195-E2 in a single class layout with 136 seats and will deploy the aircraft on several domestic and international routes.

“Over the last 10 years Azul revolutionized the Brazilian aviation market. We have helped to double the domestic market by providing service to regions, cities and communities that have never had service before, all thanks to the Embraer E195-E1 aircraft. Now with the E195-E2 we are ready to launch the next chapter in Brazilian aviation. We could not be more proud to bring this Brazilian aircraft, built with Brazilian technology and innovation to the Brazilian skies”, said David Neeleman, Azul’s founder and chairman of the board. “The E2 represents the next significant step in Azul’s fleet transformation, further powering our margin expansion story well into the years to come”, concluded Neeleman.

“Everyone at AerCap is thrilled to deliver the world’s first Embraer E195-E2 aircraft to Azul. We have no doubt that this incredible aircraft will drive two of Brazil’s global leaders to new heights. We wish both Embraer and Azul every success with the E-Jets E2 program and we look forward to working with both of them for many, many years to come,” said Aengus Kelly, CEO of AerCap.

Flight tests confirmed that the aircraft is better than its original specification. Fuel consumption is 1.4% lower than expected – that’s 25.4% less fuel per seat compared to the current-generation E195. Maintenance costs are 20% lower. The E195-E2 is the most environmentally friendly aircraft in its class, having the lowest levels of external noise and emissions. The cumulative margin to ICAO Stage IV noise limit ranges from 19 to 20 EPNdB, 4.0 EPNdB better than its direct competitor.

Like the E190-E2, the E195-E2 has the longest maintenance intervals in the single-aisle jet category with 10,000 flight hours for basic checks and no calendar limit for typical E-Jet operations. This means an additional 15 days of aircraft utilization over a period of ten years compared to current generation E-Jets.

The E195-E2 features new ultra-high bypass ratio engines, a completely new wing, full fly-by-wire and new landing gear. Compared to the first-generation E195, 75% of aircraft systems are new. The E195-E2 has 3 additional seat rows. The cabin can be configured with 120 seats in two classes, or up to 146-seats in a single class layout.

Embraer is the world’s leading manufacturer of commercial aircraft up to 150 seats with more than 100 customers across the world. For the E-Jets program alone, Embraer has logged more than 1,800 orders and 1,500 aircraft have been delivered. Today, E-Jets are flying in the fleets of 80 customers in 50 countries. The versatile 70 to 150-seat family is flying with low-cost airlines as well as with regional and mainline network carriers.

AerCap is the global leader in aircraft leasing with 1,373 aircraft owned, managed or on order and $43.1 billion in total assets as of June 30, 2019. AerCap has one of the most attractive order books in the industry. AerCap serves approximately 200 customers in approximately 80 countries with comprehensive fleet solutions. AerCap is listed on the New York Stock Exchange (AER) and has its headquarters in Dublin with offices in Shannon, Los Angeles, Singapore, Amsterdam, Shanghai, Abu Dhabi, Seattle and Toulouse.

Azul S.A. (B3: AZUL4, NYSE: AZUL), the largest airline in Brazil by number of flight departures and cities served, offers 870 daily flights to 114 destinations. With an operating fleet of 130 aircraft and more than 12,000 crewmembers, the Company has a network of 220 non-stop routes as of June 30, 2019. In 2019, Azul was awarded best airline in Latin America by TripAdvisor Travelers’ Choice and also best regional carrier in South America for the ninth consecutive time by Skytrax. In 2018, the Company was elected best airline by Kayak’s Flight Hacker Guide. Azul also ranked as most on-time airline in Brazil in 2018 according to FlightStats. For more information visit www.voeazul.com.br/ir.

Embraer and Azul Firm Up Order for Additional E195-E2 jets