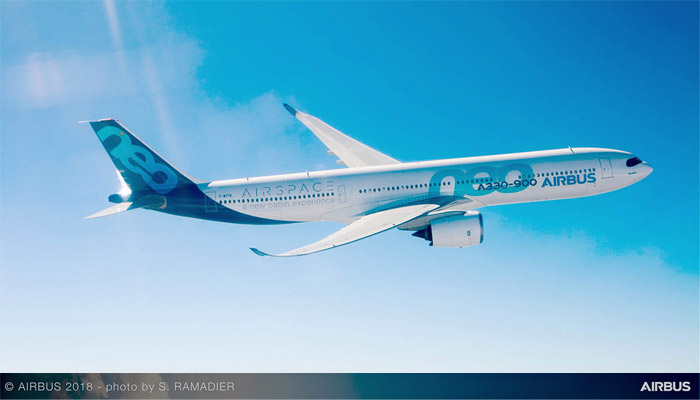 Toulouse, 28 January 2019 – The European Aviation Safety Agency (EASA) has approved the A330-900 for ETOPS (Extended-range Twin engine aircraft Operations) ‘beyond 180 minutes’ diversion time. This significant achievement means that operators of the A330neo, which is powered by Rolls-Royce Trent 7000 engines, will benefit from the most efficient, reliable and direct long-range routings.

The approval, which includes ETOPS 180min capability in the aircraft’s basic specification, now also includes the option for ‘ETOPS 285min’. This extends the potential air diversion distance to around 2,000nm. The US FAA’s respective ETOPS certification is expected soon.

A330neo operators which choose the ETOPS 285min option will be able to serve new direct ‘non-limiting’ routings. Meanwhile, operators flying on existing routes (currently flown with up to 180 minute diversion time) will be able to traverse a straighter, quicker and more fuel efficient path, and also have access to more – and possibly better equipped – en-route diversion airports if needed.

The granting of this ETOPS capability is a testimony to the aircraft’s design and systems maturity, which has been demonstrated to be as good as its predecessor – the versatile and extremely reliable A330-200/-300 family, proven over many millions of flights.

The A330neo is a true new-generation aircraft family comprising the A330-900 and the smaller A330-800. The A330-900 in particular is the lowest seat-mile cost 300-seater which incorporates highly efficient Rolls-Royce Trent 7000 engines, a new 3D-optimised wing with greater span and lighter composite materials, plus new wingtip Sharklets. Together, these advances bring greater range (around 7,200nm with a three-class cabin) and 25 per cent lower fuel consumption compared with older generation aircraft of similar size.

The A330 is one of the most popular widebody families ever, having received over 1,700 orders to date from 120 customers. More than 1,400 A330s are flying with over 120 operators worldwide. The A330neo is the latest addition to the leading Airbus twin-engined widebody family, which alongside the A350 XWB, offer unmatched space and comfort combined with unprecedented efficiency levels and long-range capability.

In 2009, the Airbus A330-200/-300 became the first airliner family to gain an ETOPS ‘Beyond 180min’ certification, which was granted by EASA. Airbus twin-engined airliners have accumulated over 20 million ETOPS flight hours, most of which have been accumulated by the A330 Family.

“ETOPS” is a set of rules initially introduced by International Civil Aviation Organisation (ICAO) in the mid-1980s to allow commercial operations with twin-engine aircraft on routes beyond 60min flying time from the nearest airport and which were previously operated only by aircraft with more than two engines. These rules, which are now named “EDTO” (Extended Diversion Time Operations) by ICAO have been progressively revised to allow operations beyond 180min diversion time.

Airbus is a global leader in aeronautics, space and related services. In 2017 it generated revenues of €59 billion restated for IFRS 15 and employed a workforce of around 129,000. Airbus offers the most comprehensive range of passenger airliners from 100 to more than 600 seats. Airbus is also a European leader providing tanker, combat, transport and mission aircraft, as well as one of the world’s leading space companies. In helicopters, Airbus provides the most efficient civil and military rotorcraft solutions worldwide.