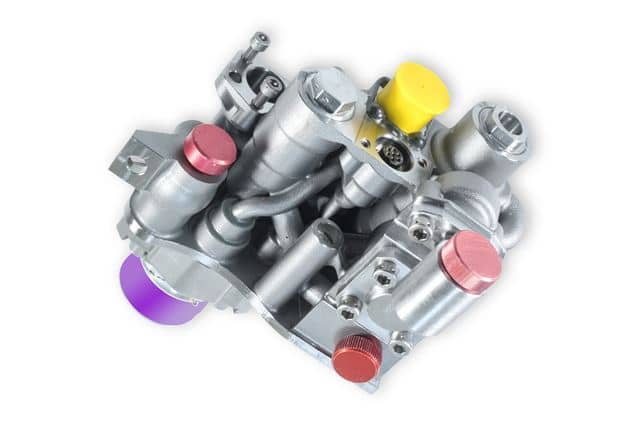 The valve block made from titanium powder is part of Liebherr-Aerospace’s spoiler actuator and provides primary flight control functions on board the A380. It offers the same performance as the conventional valve block made from a titanium forging, but it is 35 % lighter in weight and consists of fewer parts. The manufacturing process is less complex and extremely material-efficient compared to the traditional milling process: fine titanium powder is melted and built up layer by layer using laser, which reduces titanium waste to a minimum.

Liebherr-Aerospace developed the 3D printed hydraulic component in close cooperation with Airbus and the Chemnitz University of Technology, Germany. The project was partly funded by the German Federal Ministry of Economic Affairs and Energy. The first flight testing of a 3D printed primary flight control hydraulic component shows that Liebherr-Aerospace and Airbus are pioneering the way aircraft systems will be developed and manufactured in the future. Their continuous investment and research into 3D printing now clearly yields fruit.

Heiko Lütjens, Liebherr-Aerospace & Transportation SAS Managing Director & CTO Flight Control and Actuation Systems, Landing Gear Systems and Hydraulics explains: “We still have quite a way to go until we can introduce 3D printing technology on a broad scale in the aerospace industry. All parts of the process chain – from the powder material, over the laser parameters, the post processing, up to the final product – need to be optimized in order to improve stability, maturity, and economic efficiency. Nevertheless, the potential and vision of 3D printing will change the way future aircraft generations will be developed.”

3D printing, also known as additive manufacturing, has the potential to bring about a fundamental change in the aerospace industry. It reduces the manufacturing complexity, wastes less material, and also offers huge advantages regarding the design of components: as additive manufacturing enables the production of complex shapes, 3D printed components consist of fewer parts than conventional components. New innovative products which are lighter in weight, but of the same quality, can therefore be manufactured much faster. The next generation of additive manufacturing technology will influence the design process of components even more. Liebherr-Aerospace estimate that the resulting weight savings at system level could significantly contribute to a reduction of fuel consumption as well as CO2 and NOx emissions of future aircraft.

Liebherr-Aerospace & Transportation SAS is already working on the next generation of 3D printed hydraulic and electro-mechanic components such as a highly integrated rudder actuator. Unlike the conventionally produced version, the 3D printed component does not  feature a separate valve block, neither does it have a separate cylinder housing nor an extra reservoir – all parts are built into one monolithic, compact housing.

Be the first to comment on "World Premier: First Ever 3D Printed Primary Flight Control Component"