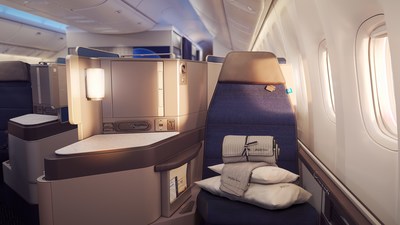 *Flight and aircraft schedules are subject to change.** United offers two daily flights between SFO-FRA through October 27, 2017. The 777-300ER will serve flights UA 58/59.

This new seat represents the latest in the continued roll-out of United Polaris, the airline’s most significant product transformation in more than a decade, featuring a reimagined, sleep-enhancing experience for intercontinental travelers.

The Boeing 777-300ER features 60 seats in business class in a 1-2-1 configuration with direct-aisle access from all seats.

Throughout the aircraft, the cabin interior is comprised of bespoke branding elements as well as carpets, fabrics and wall laminates ? that, like the United Polaris seat, were specially designed for United, as well as redesigned lavatories which include modern finishings and farmhouse-style sinks. With a focus on providing a more tranquil journey for customers, the new cabin design features LED mood-lighting to complement sleep and assist with time-zone changes as well as textured and softer touch materials which not only provide a more premium feel, but will absorb aircraft noise and other sound within the cabin.

United Airlines and United Express operate approximately 4,500 flights a day to 337 airports across five continents. In 2016, United and United Express operated more than 1.6 million flights carrying more than 143 million customers. United is proud to have the world’s most comprehensive route network, including U.S. mainland hubs in Chicago, Denver, Houston, Los Angeles, New York/Newark, San Francisco and Washington, D.C. United operates 743 mainline aircraft and the airline’s United Express carriers operate 478 regional aircraft. The airline is a founding member of Star Alliance, which provides service to 190 countries via 28 member airlines. For more information, visit united.com, follow @United on Twitter or connect on Facebook. The common stock of United’s parent, United Continental Holdings, Inc., is traded on the NYSE under the symbol “UAL”.