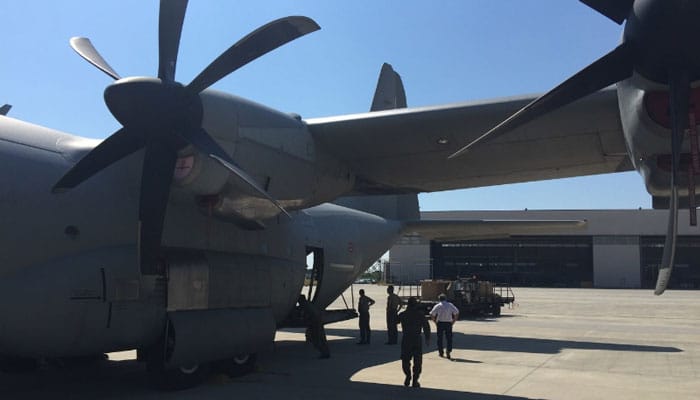 Following Caylym’s successful adoption as the Containerized Aerial Fire Fighting System (CAFFS) of choice at the Romanian C-27J user’s conference in May was the invitation from the Royal Thailand Air Force (RTAF) to demonstrate the Guardian’s capabilities.

Like the U.S., many countries are searching for alternatives to respond to the increasing threat and destruction of wildfires. Billions of dollars are spent each year on prevention, fighting, restoring and dealing with secondary consequences of wildfires. The world is looking for solutions.

Attacking wildfires from the air has continued to gain momentum as the tactics and challenges of fighting wildfires present new opportunities for innovation. One such innovation has been developed by Caylym, a Fresno-based, service disabled, veteran owned, small business. The Guardian containerized aerial firefighting system (CAFFS) has been sought out by both local and international governments to help meet the need of equipping agencies with enough aerial delivery capability to gain an upper-hand when fighting this perennial menace.

Caylym was invited by the RTAF to demonstrate the Guardian’s capabilities. After a morning of briefings, the crews headed out to the flight-line where the Guardians were assembled and rigged in just over 2 minutes. After watching the demonstration, the Thai crew were anxious to assemble and rig a unit. With some simple coaching, the Thai crew was able to prepare a Guardian in just over five minutes for its maiden drop in Asia. The crew expressed appreciation for the Guardian’s ease of assembly, simple design, and intuitive rigging. The Guardians were then filled and loaded into the RTAF’s Hercules C-130H.

After two sorties and four successful drops the RTAF was satisfied and convinced that this is the capability they need to maximize their resources to battle wildfires. Each Guardian performed exactly as anticipated by opening behind and below the aircraft and creating an overlapping cloudburst that fell and soaked the target area. Cleanup was simple as each unit and its components remained tethered and fell predictably into the target area. One senior Thai Official commented, “The Guardian will help our Air Force to save people and homes in my country.”

Several observations made by the host country included how gently and orderly each of the empty boxes landed in the target area. It was noted that the design of the drogue-chute-like box cap ensures the boxes descend softly. The ease and speed of taking each box from its shipping configuration to fully prepared was unexpected. Most importantly each Guardian opened consistently and drenched the target areas. James Tadlock, Director of Operations, summed the experience up by sharing an official’s comment, “We look forward to having this capability in our country.”

The Guardian has been dropped from the C-27J Spartan (1,584 gal), the C-130 Hercules (4224 gal or with the new Capewell buffer stop (5,280 gal), and the C-123 Provider. The Guardian has passed, without restriction, the U.S. military’s tests and has been approved for DoD testing operations.

Be the first to comment on "The Guardian, Aerial Firefighting System, Successfully Completes Testing with Royal Thai Air Force"