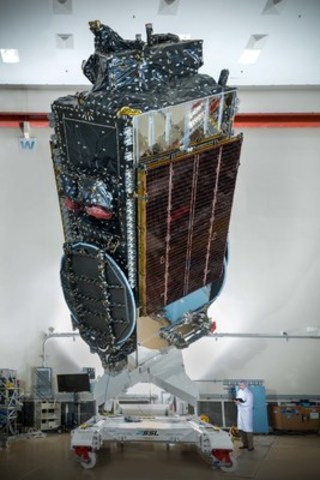 “EchoStar XIX is an exceptionally powerful satellite that underpins the next generation of satellite Internet,” said John Celli, president of SSL. “It has been an honor to work closely with our long term colleagues at Hughes, advancing satellite’s capability to improve lives by bringing the benefits of quality, high-speed Internet service to homes and small businesses across North America that were previously unserved or underserved by terrestrial broadband services.”

EchoStar XIX provides significantly more capacity than EchoStar XVII, which was also built by SSL and launched in 2012. Like EchoStar XVII, EchoStar XIX is a large, multi-spot beam Ka-band satellite based on the powerful SSL 1300 platform, which has the capability to support a broad range of applications and technology advances. SSL has built nearly 50 satellites with HTS payloads, including two of the highest capacity broadband satellites in service today, and the world’s first true high-throughput satellite, which was launched in 2005.

“EchoStar XIX provides us with increased capacity and coverage enabling us to launch HughesNet Gen5, the next generation of our successful HughesNet satellite Internet service, delivering more speed, more data, and more advanced features for consumers and small businesses in the communities we serve,” said Pradman Kaul, president of Hughes Network Systems. “SSL has been an important partner in helping us achieve this expanded service. It is indeed gratifying to work together to push the capability of satellite technology beyond what was previously possible.”

About Hughes Network SystemsHughes Network Systems, LLC (Hughes) is the global leader in satellite broadband for home and office, delivering innovative technology solutions and a comprehensive suite of HughesON? managed services for enterprises and governments worldwide. HughesNet® is the #1 high-speed satellite Internet service in the marketplace, with offerings to suit every budget. To date, Hughes has shipped more than 5 million systems to customers in over 100 countries, representing approximately 50 percent market share. Its products employ global standards approved by the TIA, ETSI and ITU organizations, including IPoS/DVB-S2, RSM-A, and GMR-1.