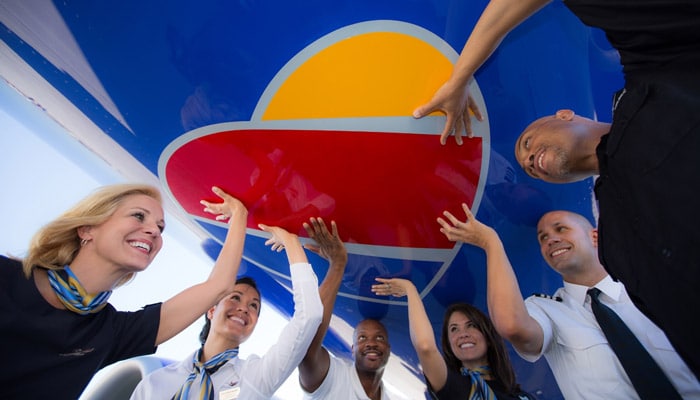 Southwest Airlines Co. (NYSE: LUV), the carrier offering more seats than any other carrier each day to, from, and within California, embarked upon a new chapter in a faithful 35-year partnership with California travelers today. Southwest® celebrates inaugural service at Long Beach Airport, the carrier’s 98th city served, now offering service in all five major commercial airports in the L.A. Basin with four flights a day to and from the Bay Area nonstop between Long Beach and Oakland.

“Southwest’s arrival in Long Beach brings much needed competition not just with our unique value and unparalleled Customer Service, but with unmatched access to the rest of the country through our Oakland gateway,” said Paul Cullen, Southwest Airlines’ Vice President of Corporate Planning and Financial Planning and Analysis, at a morning news conference before the airport’s first Southwest departure. “The initial schedule for Long Beach offers long reach with easy connections to 19 cities through our four flights a day to Oakland.”

“I’m thrilled to welcome Southwest Airlines to Long Beach,” said Mayor Garcia. “This is an exciting and positive development for our city and the entire region, and one more great reason to fly through Long Beach Airport.”

“We are delighted to welcome this new partner and one of the most recognizable airline carriers to Long Beach,” said Stacy Mungo, Long Beach Councilwoman. “At the center of Southwest’s business model are people and culture, which is only fitting given our city’s unique sense of community.”

“Southwest is a welcomed addition to Long Beach Airport, where our customers value the convenience and excellent customer service that we provide,” said Juan López-Rios, Interim Director. “We are proud to be able to provide that same service to our Southwest customers as they enjoy the relaxed travel experience for which LGB is known.”

In its 45th year of service, Dallas-based Southwest Airlines Co. (NYSE: LUV) continues to differentiate itself from other air carriers with exemplary Customer Service delivered by more than 50,000 Employees to more than 100 million Customers annually. Southwest operates more than 3,900 departures a day during peak travel season across a network of 97 destinations in the United States and seven additional countries. Service to Long Beach, California, the carrier’s 98th city, begins June 5, 2016.

Based on the U.S. Department of Transportation’s most recent data, Southwest Airlines is the nation’s largest carrier in terms of originating domestic passengers boarded. The Company operates the largest fleet of Boeing aircraft in the world, the majority of which are equipped with satellite-based WiFi providing gate-to-gate connectivity. That connectivity enables Customers to use their personal devices to view video on-demand movies and television shows, as well as more than 20 channels of free, live TV compliments of our valued Partners. Southwest created Transfarency?, a philosophy which treats Customers honestly and fairly, and in which low fares actually stay low. Southwest is the only major U.S. airline to offer bags fly free® to everyone (first and second checked pieces of luggage, size and weight limits apply, some airlines may allow free checked bags on select routes or for qualified circumstances), and there are no change fees, though fare differences might apply. In 2014, the airline proudly unveiled a bold new look: Heart. The new aircraft livery, airport experience, and logo, showcase the dedication of Southwest Employees to connect Customers with what’s important in their lives.

From its first flights on June 18, 1971, Southwest Airlines launched an era of unprecedented affordability in air travel described by the U.S. Department of Transportation as “The Southwest Effect,” a lowering of fares and increase in passenger traffic whenever the carrier enters new markets. With 43 consecutive years of profitability, Southwest is one of the most honored airlines in the world, known for a triple bottom line approach that contributes to the carrier’s performance and productivity, the importance of its People and the communities they serve, and an overall commitment to efficiency and the planet. The 2015 Southwest Airlines One Report? can be found at SouthwestOneReport.com.

Be the first to comment on "Southwest Airlines Launches Service At Long Beach Airport, Bringing More Service Between The L.A. Basin And San Francisco Bay"