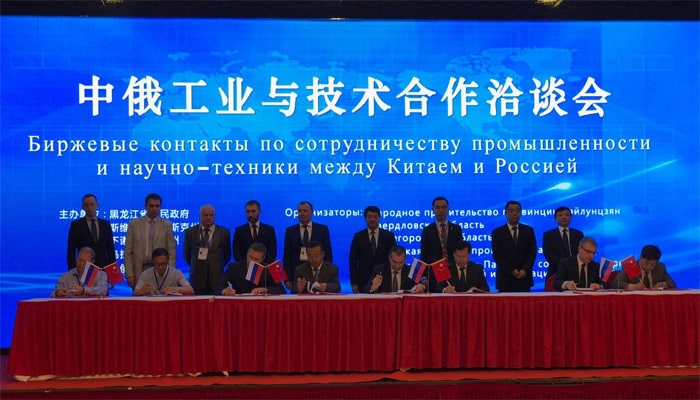 As part of the Fourth China-Russia Expo, on June 16, United Engine Corporation (UEC, a company of Rostec) and Harbin Turbine Company (HTC), a Chinese state-owned company, concluded a strategic partnership agreement on the development, manufacturing and delivery of small and medium-sized industrial gas turbine units.

The agreement was signed by Alexander Karaoglanov, Sales Director and Head of the Sales Department of the Energy and Industrial Programs Division of JSC UEC, and by Yao Hongwei, President of HTC. The agreement was initialed in the presence of representatives of the government of the Heilongjiang Province of China.

“We believe that cooperation between UEC and a major Chinese manufacturer such as HTC will enable us to achieve impressive results on the Chinese market,” commented Alexander Karaoglanov.

The agreement provides for cooperation between UEC and HTC aimed at launching licensed production of 16 MW gas turbine power units in China on the basis of Russian GTU-16 gas turbines and joint development of 40 MW gas turbine units for mechanical and electric drive applications.

UEC is currently expanding its cooperation with Chinese partners both in the supply of power generation equipment manufactured by UEC to the Chinese market and in joint development of advanced industrial gas turbine equipment. In addition, the company is working with Chinese manufacturers of compressor equipment, generators and metal structures to enable the use of Chinese products in UEC’s projects in Russia and in other countries.

Rostec State Corporation is a Russian corporation that was established in 2007 to facilitate the development, production and export of high-tech industrial products designed for civilian and military applications. The Corporation comprises over 700 organizations that are currently part of 11 holding companies operating in the military-industrial complex and 3 holding companies working in civilian industry, as well as 80 directly managed organizations. Rostec’s portfolio includes well-known brands such as AVTOVAZ, KAMAZ, Kalashnikov Concern, Russian Helicopters, VSMPO AVISMA, UralVagonZavod, etc. Rostec companies are located in 60 constituent entities of the Russian Federation and supply products to more than 70 countries. In 2016, the consolidated revenue of Rostec amounted to 1 trillion 266 billion rubles, while the consolidated net income and EBITDA amounted to 88 and 268 billion rubles respectively. In 2016, the average salary in the Corporation was 44,000 rubles. According to Rostec strategy, the main objective of the Corporation is to ensure that Russia has a technological advantage in highly competitive global markets. Rostec’s key objectives include the introduction of a new techno-economic paradigm and the digitalization of the Russian economy.