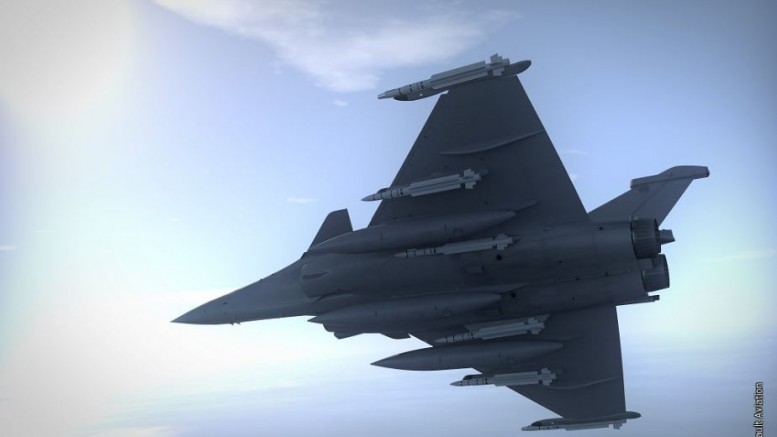 Saint-Cloud, France, 17 December 2015 – The contract for the purchase of 24 Rafale aircraft by Qatar came into force today.
Signed in Doha on 4 May 2015, in the company of His Highness Sheikh Tamim bin Hamad Al Thani, Emir of the State of Qatar, and Mr. François Hollande, President of the French Republic, this contract represents a new milestone in the strategic partnership between Qatar and France. It also confirms the historical ties that have been forged with Dassault Aviation for almost forty years.
“In a demanding geopolitical context, Qatar wants to benefit from the Rafale’s qualities in the same way as it was able to do previously with those of the Mirage F1, Alpha Jet and Mirage 2000. Dassault Aviation and the 500 French companies associated with the Rafale program are honored by this demonstration of trust”, said Eric Trappier, CEO of Dassault Aviation.

About the Rafale:
The Rafale is a twin-jet fighter aircraft able to operate from both an aircraft carrier and a shore base. The fully versatile Rafale is able to carry out all combat aviation missions: air defense, interception, ground support, in-depth strikes, reconnaissance, anti-ship strikes and nuclear deterrence. The Rafale entered service with the French Navy in 2004 and with the French Air Force in 2006. The Egyptian Air Force received its first aircraft in 2015. The Rafale has proven its worth in combat in Afghanistan, Libya, Mali, Iraq and Syria. On 30 June 2015, 138 Rafale aircraft had been delivered.
About Dassault Aviation:
With more than 8,000 military and civil aircraft delivered to more than 90 countries over the past 60 years, and having logged nearly 28 million flight hours to date, Dassault Aviation can offer recognized know-how and experience in the design, development, sale and support of all types of aircraft, from the Rafale fighter to the Falcon range of high-end business jets, as well as military unmanned air systems. In 2014, Dassault Aviation reported revenues of €3.68 billion. The company has almost 11,700 employees.
www.dassault-aviation.com
Twitter: @Dassault_OnAir