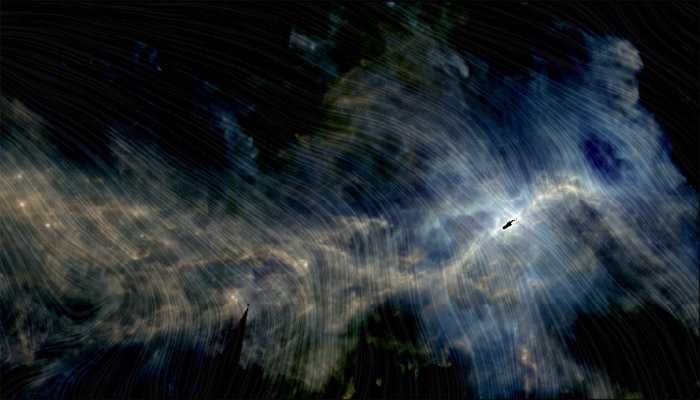 Stars form within giant clouds of gas and dust that pervade galaxies like our own Milky Way. This image depicts one such cloud, known as Orion A, as seen by ESA’s Herschel and Planck space observatories.

At 1350 light years away, Orion A is the nearest heavyweight stellar nursery to us. The cloud is packed full of gas – it contains so much material, in fact, that it would be capable of producing tens of thousands of Suns. Along with its sibling, Orion B, the cloud makes up the Orion Molecular Cloud Complex, a vast star-forming region within the constella-tion of Orion, which is most prominent in the night sky during northern hemisphere winter and southern hemisphere summer.

The different colours visible here indicate the light emitted by interstellar dust grains mixed within the gas, as observed by Herschel at far-infrared and sub-millimetre wavelengths, while the texture of faint grey bands stretching across the frame, based on Planck’s measurements of the direction of the polarised light emitted by the dust, show the orientation of the magnetic field.

As evident from images like this, the space that sits between stars is not empty but is instead filled with a cool substance known as the interstellar medium (ISM) – a mix of gas and dust that often clumps together. When these clumps become dense enough they start to collapse under their own gravity and become hotter and hotter and denser and denser until they spark something exciting: the creation of new stars.

Magnetism is an important component of the ISM. Magnetic fields permeate the Universe, and are involved in helping clouds of matter maintain the delicate balance between pressure and gravity that eventually lead to the birth of stars. The mechanisms that oppose the gravitational collapse of star-forming clouds remain somewhat unclear, but a recent study suggests that interstellar magnetic fields play a significant role in guiding the flows of matter in the ISM, and may be a key player in preventing inter-stellar cloud collapse.
The study finds that matter within the ISM is coupled to the surrounding magnetic field and can only move along its lines, creating a sort of ‘conveyor belts’ of field-aligned mat-ter, as expected from the effect of electromagnetic forces. When these interact with an ex-ternal source of energy – such as an exploding star, or other material moving through the galaxy – these flows along the magnetic field lines converge. The process creates a compressed pocket of higher density that appears to be perpendicular to the field itself. As more and more matter streams inwards, this region becomes increasingly dense, until it eventually reaches the critical density for gravitational collapse and crumples in on it-self, leading to the formation of stars.

The data comprising this image were gathered during Planck’s all-sky observations and Herschel’s ‘Gould Belt Survey’. Operational until 2013, both Herschel and Planck were instrumental in exploring the cool and the distant Universe, shedding light on many cosmic phenomena, from the formation of stars in our Milky Way galaxy to the expansion history of the entire Universe.

Be the first to comment on "Orion A in infrared"