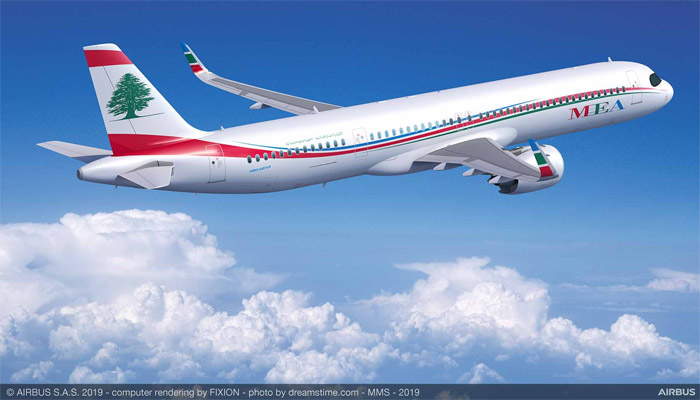 The agreement takes Middle East Airlines’ cumulative single aisle orders with Airbus to 15 A321neo family aircraft, including 11 A321neos and 4 A321XLRs with deliveries starting in 2020. MEA will use the A321XLR to strengthen its network in Africa and Asia.

The A321XLR is the next evolutionary step from the A321LR which responds to market needs for even more range and payload, creating more value for the airlines. From 2023, it will deliver an unprecedented Xtra Long Range of up to 4,700nm – 15% more than the A321LR and with 30% lower fuel burn per seat compared with previous generation competitor aircraft. This will enable operators to open new world-wide routes such as India to Europe or China to Australia, as well as further extending the Family’s non-stop reach on direct transatlantic flights between continental Europe and the Americas. For passengers, the A321XLR’s new Airspace cabin will provide the best travel experience, while offering seats in all classes with the same high-comfort as on a long-haul wide-body, with the low costs of a single-aisle aircraft.

The A320neo and its derivatives are the world’s best-selling single-aisle aircraft family with over 6,500 orders from some 100 customers since its launch in 2010. It has pioneered and incorporated the latest technologies, including new generation engines and the industry’s reference cabin design, delivering 20% fuel cost per seat savings alone. The A320neo also offers significant environmental benefits with nearly a 50% reduction in noise footprint compared to previous generation aircraft.

Middle East Airlines, member of the global SkyTeam alliance with a consolidated route network covering 1150 destinations in 177 countries, the national airline of Lebanon, is one of the leading Middle Eastern carriers. From its home base in Rafik Hariri International Airport in Beirut, Middle East Airlines flies to 32 international destinations in Europe, Middle East and West Africa. MEA’s fleet consist of 18 Airbus Aircraft. MEA offers its customers luxurious services both on ground and on board, reflecting Lebanese culture and hospitality.

TAQNIA: Rockwell Collins has joined an initiative with Airbus